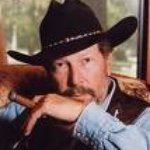 You have to admire Kinky Friedman. With very little effort he manages to irritate just about everybody. He did in the early 70s when he fronted his country music band Kinky Friedman and the Texas Jewboys, who parlayed broadly satirical political and country songs and willfully provocative anti-feminist rants such as Get Your Biscuits in the Oven and Your Buns in the Bed.

And he’s been doing it again since he reinvented himself in '86 as a writer with his short piece entitled My Scrotum Flew Tourist: A Personal Odyssey about his pre-Jewboys Peace Corps experiences in Borneo. It appeared in High Times, "the magazine of the recreational doper."

Friedman’s a literary star these days ("Yeah, it belies the expression that there are no second acts in American lives”) with half a dozen hilarious mystery novels behind him which cross the Damon Runyon/Raymond Chandler axis with Jack Benny, Frank Zappa and Hank Williams. And he tours with a show in which he sings, reads from his books and invite his companion Rita Jo Thompson, a former Miss Texas, to demonstrate line-dancing.

"Yeah, ” he says, chomping on his standard accessory, a fat cigar, “Kinky will sing the songs that made him infamous and read from the books that made him respectable. It's not a comeback for the Kinkster, though, because we were never commercial enough to make a comeback."

Friedman and his Jewboys may not have sold many records (although a packaging of old live material, Last Testament and New Revelations, has sold over 100,000 copies in the States) but they were certainly notorious.

The country music community didn’t quite know what to make of an outrageously dressed, flag-waving Jewish Texan who wrote songs such as They Ain't Making Jews Like Jesus Anymore, High on Jesus and a ballad about the mass murderer Charles Whitman.

Old-timers such as Buck Owens got upset: “I contended that Buck was a humourless, constipated prig , unAmerican, unmelodic and unpleasant. Hell, even Kris Kristofferson could sing better than him,” said Friedman in 1980.

Friedman doesn’t pull punches, then or now. ("Even bigots need to be entertained.”)

Being an author now is better than being “an applause junkie,” he says, and the hotel rooms are more comfortable on author tours than travelling the country circuit in a tour bus.

“Most people now know me as an author and many think all that thing with the music is apocryphal," he says while acknowledging the confusion may be because the central gumshoe in his novels is a former country-singer called Kinky Friedman and various songs, friends and real-life incidents are peppered through the books.

“But you know, authors are such stultifyingly dull people that I’m positively charismatic compared with most of them. And as an author you can be as big an asshole as you want to be: people don't seem to mind an author being really repellent.

"Gore Vidal, Joseph Heller, Jeffrey Archer . . . they’re all real unpleasant chaps; at least they come off that way. As an entertainer you’d die.

"But l’ve got pretty limited personal goals: to be fat, famous, financially fixed and a faggot by 50.”

You want to be Elvis? 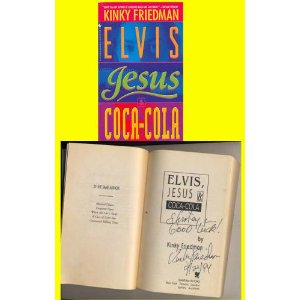 “Yeah, Elvis, Jesus and Coca-Colo," he says, referring to his latest novel which Faber has snapped up and repacked with his earlier writings. “I put Elvis first all right, but only because Jesus doesn’t have a postage stamp.”

In conversation, as with his novels and songs, Friedman is the master of the well-rehearsed one-liner, such as a lunk-headed Texas aphorisms: “Money may buy you a fine dog, but only love can make it wag its tail," or "if the Texas Jewboys had had any success, we’d be playing Disneyland now with the [Gladys Knight's] Pips,” and “you can pick your nose and you can pick your friends, but you can’t wipe your friends off your saddle”.

A couple ring more true than others, though: "When the horse dies, get off – which I applied to my country career” and "I was searching for a lifestyle that did not require my presence; this is it.”

What the smart rejoinders and quips belie, however, is an artist whose particular gifts have often been overlooked in the rush to acclaim his outrageousness and wit.

The mystery crime gumshoe novel -- much like real country music — is a marginalised genre (“Raymond Chandler was a bestseller in England but died a cult nerd in America, where they lionised him later") and Friedman betrays a sensitive side.

He admits real pleasure at some lines he wrote about the death of a friend being quoted back at him: “I closed my eyes and I could hear the distant faraway music that Van Gogh might have written if he’d poked out his eye instead of cutting off his ear.”

And that first album, Sold American from ’73, contained his paean to the passing of a country music star alongside his moving Ride 'Em Jewboy, which melded country and Holocaust imagery (“now the smoke from camps is rising, see the helpless creatures on their way” ).

It is those two sides to his music and writing which have seen Friedman emerge in the past five years as a cult darling and a sought-after interview subject.

The media history stacks up easily: happening upon a robbery attempt, he saved the life of the woman accused of killing John Belushi; his television show Saturday Night Kinky was the fifth highest-rating show in BBC history; and Joseph Heller - author of Catch 22 - said They Ain’t Making Jews Like Jesus Anymore was his favourite song (“I knew at that moment I’d never be a country star”).

There is a movie scheduled starring himself as himself and with appearances by Willie Nelson, Dennis Hopper, Dean Stockwell and others (“but if they don't want me to play Kinky, then the others‘ll walk and it’ll be Michael J. Fox being Kinky”); and there is serious talk of a CBS television series based on his characters.

“Writing for television is like putting together log furniture after writing novels," he says confidently, adding that he welcomes the possibility that Ted Danson or Tom Sellick might play him.

Yeah, life is pretty good for the old Kinkster, he admits. There’s a peaceful orientation to author tours where “there’s an 'oeuvre' thing happening. We use the words ‘genre,‘ 'milieu' and ‘oeuvre’ a lot”.

But no, he doesn't listen to music that much any more - certainly not to country music. These days it’s just record companies trying to fabricate a market that isn’t there, he says with reference to the Garth Brooks phenomenon.

“Those guys are just lacking an emotional heritage. They grew up hating country music; they would have hated Hank Williams and Slim Dusty. They like Dan Fogelberg. Nothing wrong with that – but it ain’t country. Garth Brooks cites Kansas and Styx as his two most important bands. Very telling.”

He speaks of his new book, Armadillos and Old Lace, being set, for the first time, in Texas (the others slum around Greenwich Village) where “they’ve plenty of wide open spaces between their ears.”

And hey, it’s Easter so, “I just want to remind people the Jews didn‘t kill Jesus; we just contracted the lumber."

And “lately I've seen some parallels between my life and Jesus’. We're both of the Jewish persuasion, neither of us ever married or had a permanent home or held a real job and we both spent most of our time travelling around just irritating people”.

Exactly. And that‘s why you’ve got to admire Kinky Friedman. 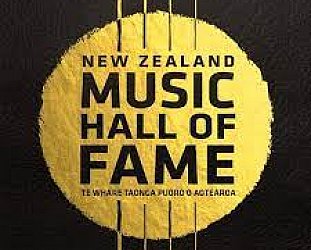