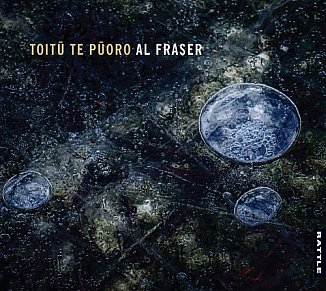 About a third the way through these sometimes weightless, sometime deeply grounded taonga puoro instrumentals – which are spacious and evoke states of mind as much as environments -- I actually said aloud, “Wow, this sounds like classical electronica.”

And at that very moment I turned the page in the excellent booklet to where one of the essayists Te Ahukaramu Charles Royal says, “Interestingly, Al's music occasionally reminds me of Douglas Lilburn's 'electronic' experiments of the 1970s and the works of John Rimmer – for they too are about space, air, the unique sound of Aotearoa's sacred landscape”.

Fraser – who has previously appeared at Elsewhere on the albums Shearwater Drift (taonga puoro with soundscapes and synths by Steve Burridge and Neil Johnstone) and with bassist Phil Boniface on the earlier Ponguru, both highly recommended to open ears – here plays a range of traditional Maori flutes to create these diverse soundscapes, and includes gentle scrapes and tapped percussion.

“Do not crowd them,” says Rev. Maori Marsden of these 11 pieces in his brief introduction.

That is excellent advice because music like this, from so far deep in culture, memory and the land invites the breathing space around it.

This is a poetic, mysterious, deep immersion album which could take the listener back in, and beyond, time and space.