"His engaging style makes these vicarious journeys seem especially real ... his marvellous ability with words delivers well-written passages that give the reader an enhanced sense of location" - New Zealand Herald

"His eye for detail allows him to paint his own vivid pictures taking in the atmospheres of Japan, America, Samoa, Thailand, Taiwan and Belgium. The pieces range from the whimsical and humorous to the matter-of-fact and serious . . . easy to pick up and rather hard to put down." - The Package

"If you listened to him telling these stories at dinner, you'd be entertained and frequently informed" - Listener

"His description of a night in Breaux Bridge in the heart of Louisiana Cajun country is a gem . . . you can smell the bayou" - North and South 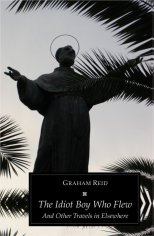 The Idiot Boy Who Flew

A new collection of travel stories by Graham Reid and a follow-up to the award-winning Postcards From Elsewhere. Available through Elsewhere or Public Address Books.

Travels and encounters in odd corners of the USA, Asia and Europe, unexpected places discovered and the title story about a journey into southern Italy in search of the birthplace of strange saint who flew.

"as delightful as you'd expect from such a skilled storyteller . . . trademark anecdotes about fascinating characters . . . the title story about a simple saint whose faith allowed him to fly, demonstrate(s) the treasures to be found as a result of doing a bit of research and exploring off the beaten tourist track . . . marvellously accurate snapshots of people and places from elsewhere; pictures in words which amuse and inspire, entertain and inform".

REGRETTABLY -- BUT HAPPILY -- BOTH OF THESE BOOKS HAVE SOLD OUT, HOWEVER MANY OF THE STORIES IN THEM HAVE BEEN, AND ARE BEING, POSTED AT ELSEWHERE FOR YOU: SEE HERE.