Culinary ideas picked up from various places around the world, most very easily made with readily available ingredients and a bit of effort -- which will be rewarded when you sit and enjoy your labours.

Try these, and send in your recipes (and the story behind them). You'll get full credit. Let's share the chow-down Elsewhere experiences. 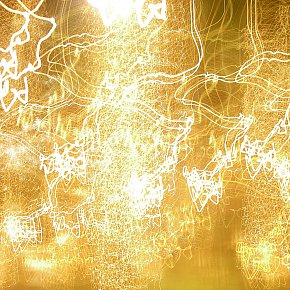 Here's another one from Vij's deservedly famous Indian restaurant in Vancouver. He says this can be served as an appetizer or as part of a meal with naan or rice. You can substitute canola oil for ghee, but you'll lose some of the flavour. The recipe follows a French style of cooking, where the prawns are cooked with the sauce, Vij says, and makes servings for six. INGREDIENTS... > Read more 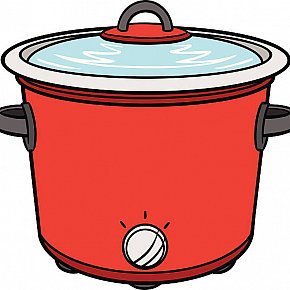 This is just one of those comfort food, soul-warmers for winter which, if cooked in a crockpot or in a big pot on a stove will also fill the house with rich flavours and smells. And best of all, it is simple. INGREDIENTS half a kg of diced beef one and a half cups of vegetable stock a glass of cheap red wine half a dozen peeled and pitted plums (or half a can of plum... > Read more This recipe was provided by Jayson Hussey, aka Mahi which means "work" because he was always working. He was the chef at the luxurious Franz Joseph Glacier Country Retreat near the Franz Joseph Glacier in New Zealand's South Island when I first met him, and that was about 15 years ago. He'd worked a number of places picking up ideas as he went and has doubtless taken many more... > Read more 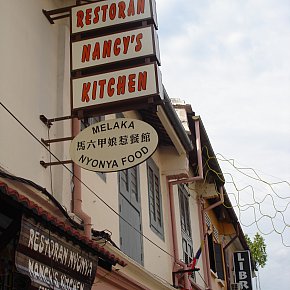 In late 2007 I spent a couple of weeks travelling around Malaysia -- and notably went to Melaka, the food capital of the country where Baba Nyonya food is a local speciality. Baba Nyonya is the cuisine of the communities that emerged in the 15th century when migrant Chinese men married local Malay women. A feature of the food is the spicy quality using local herbs, calamansi (a local... > Read more 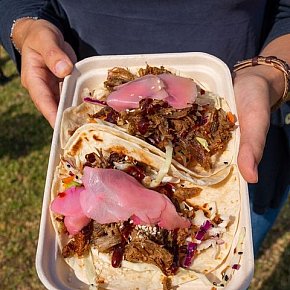 In late March the Auckland Craft Beer and Food Festival takes over the Spark Arena in downtown Auckland. With music, food trucks, craft beer and more, the ACBFF on Saturday March 27 (1-5pm) is not to be missed. To whet your appetites we have invited Jaron Archer of Brotisserie (who will of course be there at Spark) to let us publish one of their excellent taco recipes, and this is what... > Read more 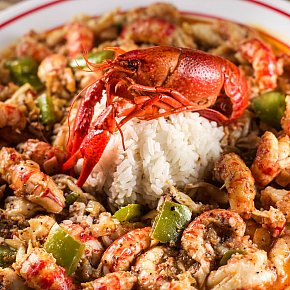 In my travel book Postcards from Elsewhere I write about being in cajun country in Louisiana where the bayou seems mysterious and the food is exceptional. That chapter about Breaux Bridge and the people we met is reproduced here for your amusement. As I say, one of the great things about that part of the world is the food, so here is a recipe which is alarmingly simple and utterly... > Read more In May 2011, 32-year old Bristol-born Ben Batterbury, the head chef at Queenstown's prestigious hotel The Rees, presented a menu of New Zealand flavours at the famous Beard House in New York, the home for food writers and chefs in America. His dishes were much acclaimed and the whole event received great press (see here for an example), yet Batterbury -- when I met him at The Rees in the... > Read more 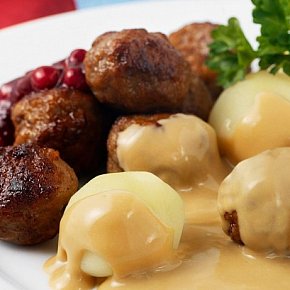 Anyone who has been to an Ikea is inevitably seduced into trying their famous Swedish meatballs. We do our own meatballs at home (with just beef, a splash of tough Texas bbq sauce and maybe some Worcestershire sauce) but here we share the official Ikea recipe which they have made available. Easier to put together than the flat-pack bookcase.  Ikea's Swedish meatballs with cream... > Read more Okay, this costs you a bottle of beer (small one though) but believe me it is worth it. Add whatever herbs you like but as you may see from what Megan writes, cumin or fennel is excellent. She says . . .  This is very easy! It comes out a bit like a bread scone and is best eaten within two days. Ingredients 375 g or 3 cups of of self-raising flour... > Read more I cannot tell a lie, the Vikram Vij who owns Vancouver's famous Vij's restaurant didn't give me this recipe himself. But it was published in the newspaper when I was there so I guess it is now public domain. (He's also posted a couple of other recipes on his website for you to try.) His lamb popsicles are a favourite at Vij's and he says he couldn't take them off the menu for fear of a... > Read more If you don't have a barbecue with a lid you might want to do this one in the oven, but there is nothing quite like the steamy aroma of the Moroccan flavours when you open the lid to check on this one. That'll have guests working up an appetite. This is a somewhat cobbled together recipe from a number of sources, but it works and should serve four to six, especially if you have a side... > Read more 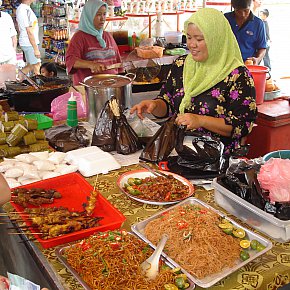 These days I, like most people, can toss together a very serviceable and reasonably impressive red curry with duck in just a matter of minutes. It helps when you have a shop selling cooked duck within a few minutes walk. But this recipe is something rather more challenging and I have to admit I stole it from a calendar that we were sent about two years ago. Goes great with raman noodles... > Read more 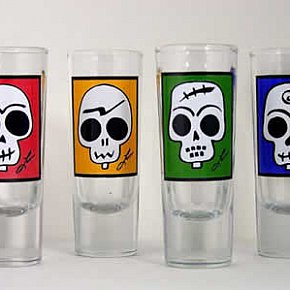 There are few things more pleasant than gently frying your brain in the summer sun (with Factor 5 and a hat of course), so in the interests of public health Elsewhere offers this recipe for a snappy cocktail which might have you talkin' trash, but no matter. No one will remember anyway. This we like because it is simple. You will need some good quality tequila, limes and Kahlua. And... > Read more 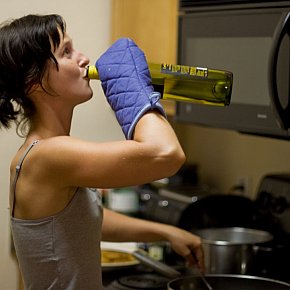 Keith offers this marvellous recipe which I can unequivocally recommend. His injunction that you should use only the best tequila is very important however -- as you will see if you read on. If, for some strange reason, this doesn't work out you might want to have someone make the whisky-infused Wicked Chicken just in case. INGREDIENTS  1 cup dark brown sugar 1 cup (two... > Read more Derek Jacombs from the Bay of Plenty is someone whose name has appeared at Elsewhere a few times: he led the band Kokomo Blues -- subsequently -- just Kokomo -- for many years and after their double CD retrospective Batten Down the Hatches of 2016, they kick started the band again for a new album, Sunset Claws. But Derek, a Dylan fan, also shares this recipe by Beatty Zimmerman who died in... > Read more Nobody in their right mind would want to follow Elvis' eating regime, but every once in a while maybe you should live like a King. This was one of his favourite recipes and I got it off an oven mitt I bought at Graceland. Sharing the secret! INGREDIENTS Two large bananas Six slices of white bread Half a cup of butter A cup of peanut butter METHOD Peel and mash... > Read more Greg offers this colourful recipe for lamb which comes with a back-story: he had it in Chicken Street in Kabul in 1979, just before the Russians invaded. It's some kind of food lover who gets a recipe written down when the tanks are rumbling across the mountains!  INGREDIENTS ¼ cup oil 2 medium sized onions – chopped 500g lamb ½ teaspoon Garam Masala ¼... > Read more 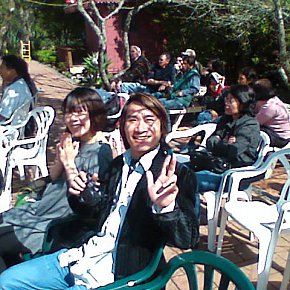 James Lantana -- more correctly Somsak Lantana -- once my Thai neighbour, was a chef back home, came to New Zealand almost 20 years ago with his beautiful Japanese wife Nana, and has worked in kitchens all around Auckland. It has been one of the great delights of my life to invite James, Nana and their terrifyingly intelligent, talented, multi-lingual daughter Sakuna over for dinner --... > Read more Some too-many years back we were driving across the States and found ourselves drawn towards Loretta Lynn's former home -- an ante-bellum mansion of the kind she described as like something out of Gone With the Wind -- which is at Hurricane Mills in East Tennessee. It was strange but compelling place -- Loretta no longer lived there of course. But like Graceland it was a pilgrimage point... > Read more 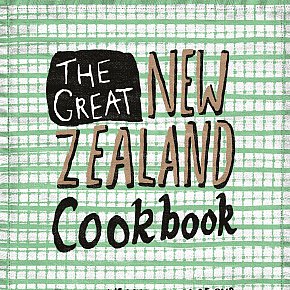 When Murray Thom has an idea it is always smart to listen, his track record is impeccable. This is the man who -- in the Eighties -- became the youngest head of a record company in the world when he took over CBS New Zealand (later Sony) while still in his 20s. And when he quit after a fine career in that business he went to a small idea which few saw any potential for: personalised... > Read more