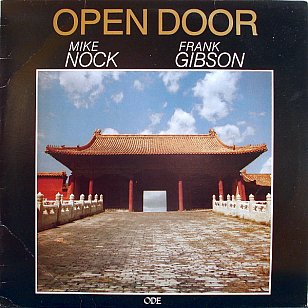 When expat pianist/composer Mike Nock and Auckland-based drummer Frank Gibson got together in '87 to record these duets both men were at interesting points in their respective but separate careers, but neither had played together much.

Their sole recording together released prior to these sessions -- they had played on some Radio New Zealand programmes together with bassist Andy Brown -- was one track on Gibson's Parallel 37 album released in '81.

Gibson has been behind some of the flashiest and most innovative fusion bands in New Zealand in the mid Seventies to early Eighties (Dr Tree and Space Case, the latter lasting until '85) but by the time he came to this recording session, his playing had changed markedly, largely thanks to his renewed association with the refined pianist Alan Broadbent.

By the time of Open Door, Gibson had played on three albums with Broadbent and had developed a playing style respectful of the space that Broadbent liked to leave.

Nock had also been through his fusion phase starting in the late Sixties, notably with his own group Fourth Way in San Francisco in which he used synthesizer some years before many others adopted it. (Gibson says in the liner notes to the reissued Parallel 37 album that he had a copy of Fourth Way's The Sun And The Moon Have Come Together album.)

Nock went to New York where he played alongside the likes of Lionel Hampton and appeared on literally scores of albums in his role as a session player or sideman. A decade later he moved to Australia and, although touring regularly, took up a position at the Sydney Conservatorium of Music.

By '87 when he and Gibson came together to record Open Door for Terence O'Neill-Joyce's Ode label, he too had developed a more constrained and thoughful style.

And that is what is so extraordinary about this album, a rare album of piano and drum duets which at times sound full and wide, and at other times minimal. There simply had been no other album like it in New Zealand jazz, and very few since which explore the same terrain.

Oddly enough the rocking and funky opener Harriet Street, which is certainly an attention getter, is in no way a signal of what follows.

On the seven minute Great Wall-Many Ancestors which the centrepiece, Nock keeps the melodies constantly shifting from sprightly uptempo parts, then punctuates in dark chords before cutting right back to delicate trickles of notes. Behind and beside him Gibson pops in deft rhythmic touches which elevate the music and probe into the spaces.

There are also moments of great and tender loveliness: notably their treatment of the ballad Danny Boy in which you would swear there is a gentle bass part played by some invisible hand.

And although they drew on three of Nock's originals (and Danny Boy), the other four pieces -- ranging from the long suite of Yin Yang to the impressionistic four minutes of the title track -- were all studio improvisations.

While Open Door understandably picked up the jazz album of the year award in New Zealand, it was extraordinary that it didn't gain enormous international attention at the time -- comparisons between Nock and Keith Jarrett at his most considered would have been justified. But although copies were sent to American jazz magazines it largely went past every reviewer. Even Nock's name and reputation in States (especially in San Francisco and New York where he was widely respected) couldn't garner it attention.

Fortunately Open Door was reissued on CD in 2006, 19 years after it first appeared and at that time I noted here at Elsewhere, "it sounds as fresh now as it did then, and the pairing of Auckland drummer Gibson with Sydney-based pianist Nock was inspired . . . one of the most impressive New Zealand jazz albums gets a welcome reissue".

It also started to gain overdue international attention and although neither Nock nor Gibson could buy enough sushi for a decent meal out of the profits, the music was timeless -- and therefore always ready for discovery.

Even now, more than two decades after its release.

Picked this up today... what a gem of an album.