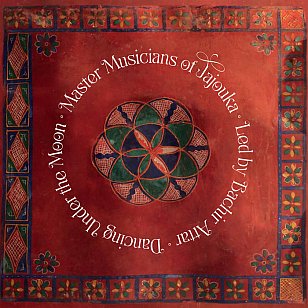 Elsewhere freely concedes this 110 minute double album will be a test for most. But having one of their earlier albums (recorded by Brian Jones of the Rolling Stones) an Essential Elsewhere Album, and having mentioned them in the context of Ornette Coleman, who recorded with them a decade later, it would be remiss not to acknowledge this.

The Master Musicians tap into an ancient trance tradition with multiple lines of melody from reed instruments over a relentless percussion.

It's a style certainly better enjoyed when seen – as I have in Marrakesh but also when leader Bachir Attar and others played with Coleman at the Barbican in London – but there is still something wildly engaging about these pieces which roll out past the 10 minute mark but which are all different, sometimes remarkably so as when flute, oud and violin arrive in various places.

A tip? Start with the romantic, atmospheric and quiet The Bird Prays for Allah then shift to L'atya before looping back into the heavyweight pieces like Dancing in Your Mind (a reference to the Coleman album Dancing in Your Head on which they appeared) and Khamsa Khamsin.