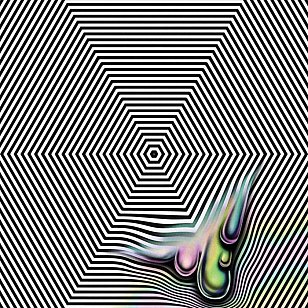 His musical breadth over his previous 10 albums has run from lush orchestrated work to blip'n'glitch electronica, weaves of evocative soundtracks, soundbites of voices and so much more. Often all within the same sonic space of a song, or perhaps more correctly a piece.

This album plays like a distillation of all those elements but also as if the radio dial is flicking quickly, sometimes picking up two different stations on the same band, at others finding everything from sweeping atmospherics to fragments of baroque sounds to pop r'n'b.

The four Cross Talk fragments dropped in throughout reenforce the radio reference.

In a weird way the album cover is a neat visual analogy for what is here as logic and order is evident, but disrupted by malleable intrusions.

Tracks like the dramatic, string-coloured Long Road Home (with Caroline Polachek), The Whether Channel (which exists between ambient music and classic early Japanese electronica) and the dreamy Vocoder atmospherics of the spaced-out pop of No Nightmares (with Th Weeknd) are immediate standouts.

Imago opens with old loop style of early Steve Reich's minimalism, then finds an atmospheric place in weightless space with washes of sound and electrostatic. (An element of Glass/Kronos minimalism returns for the first half of Shifting also.)

By virtue of his collage/cut-up method there is always a lot of musical information on a Oneohtrix Point Never album – often within the same piece – but this one has a kind of surreal beauty about it.

Goes out on the especially lovely Nothing's Special.

This album is available on limited edition double vinyl and CD, and can be heard on Spotify here.