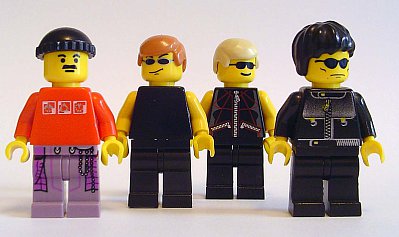 It was quite a few years ago now but I'll never forget it. U2 damn near killed me. Them, the Arizona sun, a famous architect and tequila actually.

It was during their Pop-Mart tour -- the one with the giant Spinal Tap-like lemon -- and I happened to be driving around America. They were scheduled to play at the huge Sun Devil Stadium in Phoenix and so I figured on making my way there to see them, and catch some Arizona desert and the work of the architect Frank Lloyd Wright who had established his Taliesyn West school outside Phoenix.

Well, it was May and while that isn't exactly the height of their summer in Phoenix (when they can expect average temperatures in the high 40s) it was still bloody hot. Phoenix is pretty much a slab of asphalt, concrete and buildings in the middle of the high dry plains and on this particular Friday there was no one on the shimmering streets. It was in the low 40s and the heat was so intense you didn't sweat, the perspiration just evaporated out of you.

On this Friday morning however first order of business was to get out of town and see Frank Lloyd Wright's Taliesyn which he had built out there in the scorched earth. Of course he personally hadn't built it, that task fell to manual labourers prepared to carry rocks in the bleaching sun. Frank, I guess because he was famous and rich, just thought up the idea and put others to work.

That said it was a beautiful place but what I remember as much as anything was getting out of the car at 8am and feeling the sun burn my scalp, then my brain. People were carrying umbrellas and water bottles. I had on jeans and a t-shirt, and adopted a jaunty swagger in the blazing heat.

I walked around the workspaces and offices, scoured the bookshop and then took in the gardens of cacti and rock. I stayed out of the sun for the most part but after a couple of hours inspecting this legendary place in the annals of architecture it was pretty much all done. I hadn't eaten breakfast -- I seldom do -- and on the way back to town felt a little faint. My partner said I was probably a bit dehydrated and so we should stop somewhere for lunch.

Back in the middle of deserted Phoenix we found an interesting looking Tex-Mex place just as I was really starting to fade. My eyelashes hurt, I felt dizzy and weak, but I was also hungry.

She said I had sunstroke but I knew better. I just needed to sit somewhere cool and have a drink. She said I needed to replace the salt in my body and so I hit on the perfect solution to a number of things troubling me: a tequila or two.

It had liquid, was cold, and there was salt around the rim of the glass. The ideal drink for a man in the first stages of sunstroke and suffering extreme dehydration, obviously.

So I ordered some food and a tequila and watched as the room started to swim. My head was filling with visions of Frank Lloyd Wright dressed like Bono and I kept hearing One over and over again.

I was now well woozy and almost comatose and realised what I needed was just some place to lie down. So I hit upon somewhere cool. Like the car out there in the sun-scorched parking lot.

At this point my partner took control, got my food wrapped up, shifted the second tequila out of my reach and steered me to the car where I promptly collapsed.

We drove the streets until she found us a cheap motel and put me to bed in the darkened room.

Apparently I kept babbling about how I had to see U2 because I had said I'd write a story about the show, it was only the sixth concert on this new tour, the paper was relying on me to file the story, I had paid US$100 for our tickets . . .

It wasn't until I stopped babbling I realised she was long gone. I turned on television and drifted in and out of consciousness watching I Love Lucy re-runs. I kept hearing U2 songs.

My partner returned and filled me with fluids and salt-replacement pills.

It was weird, lost day but by showtime I felt up to walking outside to the car and heading off to a place called Sun Devil Stadium.

In Phoenix U2 are considered hometown heroes: they wrapped up their Joshua Tree tour here and clips from some of their Phoenix shows appear in the movie Rattle and Hum.

The massive stadium was packed and at two hours it was a remarkable show. With corporate logos -- real and imagined -- flashing across the screens behind them and the giant golden arch they delivered a show which bristled with ideas. They also charted a canny course between their difficult new stuff alongside old classics like Pride, Bullet the Blue Sky and With or Without You.

In a sense they were pulling back a bit from the edginess of Achtung Baby and Zooropa (few songs off those albums were included) but it was grand-scale entertainment -- with a belly-dancer.

We loved it and got off on the excitement of the huge audience. They might have just about killed me tempting me to this city in the middle of blazing desert, but I forgive them for that.

Outside it's America, as Bono once famously said.

And it was still bloody hot.

Graham,your story brings back memories of The Zooropa tour at Western Springs some 20 years ago(was that the one where Bono rang up Lou Reed on stage and by the way Lou is a good mate of Dions).My mates wanted to get up real close to the stage and I hate big crowds,anyway we worked our way up to front which was an amazing crush,I fainted twice and one mate got me out of there and up onto the enbankments.The dope and the teguilla did not help.