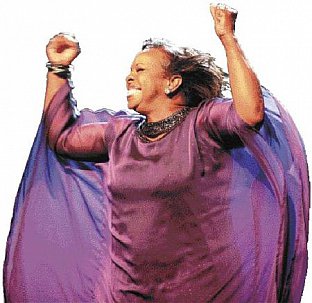 Press conferences are a waste of time and no sensible journalist entertains them. Ask your best question and everyone else gets the great answer. And if you are a print journalist those lazy slime from television go to air that night with it and you can wait a day to see it in the paper. And then your mates think you copied it from Holmes.

I long ago gave up going to press conferences, but mostly because of the inane questions from others.

I hadn't been to one for about a decade but was asked if I could go to the Duran Duran bunfight when they turned up to open for Robbie Williams. The press conference was an embarrassment. Sad radio bastards had dressed as 80s Duranies in bandanas, don't they know you can't see them on radio?

The gathered media were more like fans than journalists (I wrote as much in the Herald afterwards) and at the end most of them leaped up and asked for autographs.

I was reminded of what happened when Julian Clary came to town. The media applauded when he came into the room and he offered the tartly bemused observation, "Well, you don't get that in Australia." I spent the day with Clary and later he confided he thought the New Zealand media just wanted to see him put on a free performance. He wasn't wrong.

The only interesting press conferences are those which go slightly haywire, and early on I was cause for a couple of those.

When the Police arrived here many, many years ago Sting had lost his voice. The gathered hackettes from the weeklies were distraught, they only had eyes for Sting. The man himself graciously got on the hastily assembled stage and in a hoarse voice made his apologies then left.

Then Andy Summers and Stewart Copeland sat there looking out at a group of silent journalists, most of whom didn't know there were two other guys in the Police.

I did, and also that drummer Copeland had recorded a couple of singles under the name Clark Kent. So I waved my hand and asked him whatever happened to his alter-ego.

As much out of relief in the deadly silence as wanting to advance a solo career that no one there had heard of he got behind the mike and, adopting the voice and language of White House spokesman, said Clark was unavailable, was working on some covert operations about which he could not speak, and so on.

It was very funny and both he and I laughed. Everyone else wondered what the hell all this was about. Something about that kid from Superman comics?

After he had finished there was yet another silence, and so I asked another question of him and away he went again. And again we both laughed.

Then more silence. So I put my hand up once more but the embarrassed promoter quickly shut things down and it was pretty much all over after that. Copeland sought me out and we had a quick chat while lip-gloss gals from the women's magazines stared daggers at us.

When Wynton Marsalis came to New Zealand the first time he had to endure a press conference in Wellington in a room full of people who knew nothing about jazz other than this was its hot young face. Again there was mostly silence so I went about my business and asked various questions about the music, all of which he answered with great humour (which unfortunately seldom translates into print) and afterwards he approached me and we chatted. I took him around the Michael Fowler Centre where he and his band were to play that night and he told me in confidence that Miles Davis was back on the smack and much other good gossip besides.

But it was my very first press conference that alerted me to the fact that these are dreary set-ups -- and that if you ask a question and get the best quote by way of reply then it ends up everywhere.

It was the disco era and the great soul singer Gladys Knight came here with the Pips. Again the room was full of writers for the women's weeklies and one of them -- I swear this is true -- asked the recently separated Gladys if she had come to New Zealand to look for Mr Right.

(I thought this kind of idiocy was long passed until I saw what the stars of Peter Jackson's King Kong had to endure recently. One was asked a question not dissimilar.)

Anyway I listened to all this nonsense then asked the question which had been troubling me for some time: Why had the group abandoned the great tradition of soul music for vacuous disco?

Gladys stared at me, her brow came down and she engaged me with a steely stare. I was, if not slime, then certainly some lesser lifeform. Her fingernails cut the air like talons and she bristled at this insult. She actually rose from her seat as if to make her way across the room and slash me to pieces with those extraordinary nails.

Fortunately a wiser head -- in this case Pip Bubba Knight -- prevailed and he talked her down.

"I know what this young man is asking," he began, and then embarked on a prolonged justification of why they had embraced disco. I don't remember all that he said -- I was still keeping a wary eye on Gladys in case she made a move - - but I remember, as did everyone in the room, his final line.

"The truth is, we go where the money goes," he said.

Of that appalling press conference, that was the line that was published everywhere.

I know. I read it later in a woman's weekly.