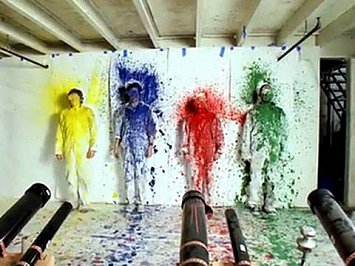 The music by the US band OK Go might be fairly mainstream and poppy for most tastes, but they are as much an art project as a band when it comes to their most innovative work, their videos.

The cleverly choreographed clip for the single Here It Goes Again from their second album Oh No in 2005 had them moving between treadmills in a series of complex and interlocking manoeuvres.

It went viral and has had around 60 million views of You Tube.

But it wasn't their first trip to the editing suite and an awards stage, nor would it be the last because their clips have become more and more interesting.

Here is taster Here It Goes Again before we fold back then forward in a small selection of their most enjoyable, innovative and often one-take short films with music.

This is their first clip, for Get Over It from their self-titled debut in 2000. It's pretty standard fare, but better would come.

This hints at their visual sensibilities, Don't Ask Me from the same album

And here comes the choreography, A Million Ways from their Oh No album

And Here It Goes Again (again) where they upped the stakes

WTF? From their third album Of the Blue Colour of the Sky in 2010 goes right back to the Eighties for the technology, but few had used in in the new millennium, and its pretty clever. Gets more clever as it goes on too.

And Heath Robinson meets Rube Goldberg and ends with Jackson Pollock? This is This Too Shall Pass from their Of the Blue Colour of the Sky. One take, done live too.

End Love from the same album with a nod to Norman McLaren's stop motion style.

Raise a toast to this one, Last Leaf

All is Not Lost

This is from their Hungry Ghosts album in 2014

Their finest moment and the best place to end although there are more, but this trompe l'oeil work is just plain genius.

The Writing's on the Wall (and indeed it is!)