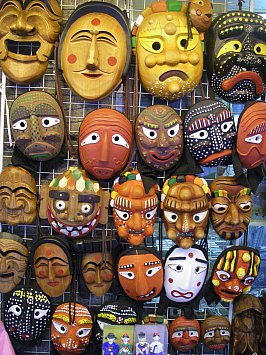 God knows what I was thinking when I went to Ullungdo.

It certainly wasn't for the well-advertised local attractions which are, in no particular order, dried squid, dried seaweed and -- its special delicacy -- pumpkin candy.

Ullungdo is a spectacular lump of rock a few hours off the east coast of the bickering Koreas.

It rarely makes it onto maps, let alone anyone's travel plans. But if a getaway escape is what you want, you won't getaway much further than bleak Ullungdo.

With a coastline of barbed wire and guard posts, a notoriously unpredictable climate, and an unattractive harbour town stinking of salty fish and seaweed, the island wouldn't seem to have much to recommend it. And it can be a rough trip on roiling seas just to get there.

As I would learn, middle-aged Korean women can throw up at will.

Good God, what possessed me to go to remote and rugged Ullungdo?

In a word: pirates.

Sitting in a small budget hotel in Seoul and with a few days to spare I had opened a bottle of soju, flicked through the Lonely Planet and found reference to this forlorn outpost -- and there it was, the word,  "pirates"!

Images of Yul Brynner in The Buccaneer, of wearing a mum-made eye-patch and being Jean Lafitte or someone roguish, hanging from the rigging-branches of the backyard grapefruit tree, of being thrilled by tales of dastardly-do on the Spanish Main wherever that might have been in my boy's imagination . . . the clash of steel cutlasses made from bits of boxwood.

To Ullungdo I must go.

However I'm not so stupid as to think real pirates would be like those of my childhood memories. I remember far too clearly the chilling silence as a low-slung boat of Thai "fishermen" cruised menacingly past the battered vessel I was on in the South China Sea.

Pirates were, I knew, real nasty bastards. Yul Brynner excepted, of course. But to learn that pirates had once used Ullungdo as a hideaway -- I prefer the more evocative "lair" -- became enough for me as I emptied the last of the soju into my glass.

So the following morning I had my hand in my pocket at Seoul's central bus depot, searching for the fare to coastal Tonghae some five hours away.

Tonghae is an uninteresting town, even by the lowered expectations of Korea. It isn't especially historic, if at all, and near the port it consists of a rabbit warren of lanes and blind alleys in which I successfully became lost. The women there neither spoke English nor read Korean, at least not when I asked them for directions. They did laugh a lot when I walked away however.

And laughed even more when ,mystified by the maze of dusty lanes I reappeared before them some 10 minutes later.

Finally I clambered a small hill and after a sprint across a puzzled farmer's field found myself in Tongae central, a town full of banks which wouldn't change my travellers cheques.

The boat had been about to sail but I had been warned on the wharf by a kindly gentleman to take more cash than I had. Ullungdo is often isolated quickly by storms, which can mean a longer and more expensive stay than intended.

People were this devoted to squid, seaweed and pumpkin candy?

With only one boat a day, I had scuttled off. In a few short minutes I had got lost, amused the dentally deprived local women, annoyed a farmer, and was now sweating around the confusing streets of Tonghae trying to find a money changer.

Finally, at a small, clean but crowded bank exactly at closing time I was beckoned to the counter by a young woman who scanned my passport and, in the only coherent English I had heard in a fortnight, asked me which area of New Zealand I came from. She had spent three years in New Plymouth which she had enjoyed.

"More than Tonghae?" I joked.

"Ah, but you are going to Ullungdo," she said, smiling.

In minutes I had a handsome swag of money and was back, in two minutes by taxi, at the unlovely and unglamorously named Muk'o Port. I paid my fare and presented my passport (you never know what those annoying Northerners might get up to) and was, as far as I could tell, the only non-Korean aboard the large, grubby vessel which confined its passengers to one huge cabin with rows of forward-facing seats.

It was a curious but enjoyable trip: people whooped gleefully as we hit the first large wave beyond the breakwater and then whooped again at the second. By the third the glee was more muted and around the sixth some former whoopers were staggering toward the tiny bathrooms.

It went quiet after that, then the entertainment flickered onto a gritty television screen. Reality television shows don't much interest me, but this one was different. It didn't appear to have a title, there were no credits, and nothing in the way of what we might call "production values".

It was just endless footage of When Animals Attack or When Good Pets Get Brutal. Much of it looked like home footage from hand-held cameras. It was one dog-fight, cock-fight, snake-v-mongoose fight after another. Around me, middle-aged men were either engrossed or loudly snoring their way through it.

Their pale wives lined up at the bathrooms.

I watched it, queasily mesmerised. Some of it was interesting in an academic way, but eventually I became bored by it and looked out at the grey ocean and endless spray out of which, I was sure, Ullungdo would rise like Skull Island in King Kong. And, just as dusk fell, it did exactly that.

It was suitably forbidding and, ominously, there were no lights visible. Not even from pirates' lairs.

The pirate tenants are long gone, of course, run off a century and a half ago by soldiers under orders from King Chijung. According to my sole text, it remained a military outpost until a little over a century ago when the first migrants were allowed to settle. They must have heard about the pumpkin candy.

Today around 20,000 people live on this green and ruggedly beautiful tip of an extinct volcano, about half of them in the port town of Todong.

I took a cheap room in a house offered by a persistent and miniature-sized woman on the quayside, then hit the town for what turned out to be an unexpectedly funny three-beer-minimum night of karaoke and dancing with a dozen elderly women who had come for the squid. Or the seaweed. Or maybe pumpkin candy.

The next morning, hung-over from too much beer, soju and off-key singing I crawled aboard an open-air boat for what I expected to be a leisurely, if wind-blown, run around the island.

My head had just rested against a cool metal pole and my eyes adjusted to the three shades of grey the day was offering when loudspeakers above me started blasting the Non-Stop Dancing mix of what I took to be Korean polka. It was physically painful but faintly hilarious.

The only other person on the boat under 60 was an architect student from Inchon who had take a year off to think about what he wanted to do. He was really a manga artist, he confided, and loved rock music but didn't want to disappoint his parents. So he had taken time to, and I put this crudely, find himself. I just couldn't understand why he would come to Ullungdo to do it. It seemed like an odd choice, but he actually liked the pumpkin candy.

We agreed the polka was very bad however.

I tried to explain the Benny Hill theme as fellow passengers waved enthusiastic if somewhat inanely at gulls and fed them squid, seaweed and probably pumpkin candy.

We all took photographs of Elephant Rock then waved at more seagulls.

That afternoon, my friend and I drank beer, walked around the foreshore until we were halted by barbed wire, then ambled around the squid and seaweed shops. He bought more pumpkin candy.

I paid $2 for a wooden keyring. It was carved in the shape of a squid.

I took the night ferry back to Tonghae with people carrying bags of dried squid, dried seaweed and, I guess, pumpkin candy.

The entertainment was international soccer, Korea playing France. By the time Korea was two goals down the boat was reduced to a gloomy silence.

I thought it was their team's poor showing, or that everyone preferred the killer animals tape.

Then the old woman behind me threw up.

God knows what I was thinking when I went to Ullungdo.

This story appears in Postcards From Elsewhere, see here: