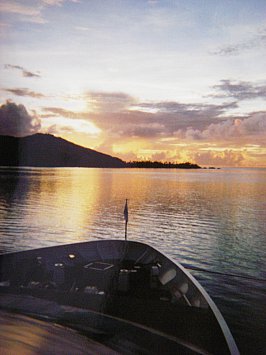 Greg would have been hard to miss in most places, but on the small beach at the southern end of Ko Samet -- a tiny teardrop-shaped island off to the east of Bangkok -- he was impossible to overlook.

It wasn't just that he was, shall we say, a large man. Or that he was conspicuously gay. And it wasn't even that he carried the pampered Miss Spitty, a white Pomeranian, with him everywhere.

Well actually, it was all those things. But mostly it was that Greg -- from Madison, Wisconsin -- was the only other guest at the improbably named Apache Resort, a grouping of cheap beach bungalows.

More than that, Greg was staying right next door.

He was very hard to miss, and a pleasure to share a holiday with.

Greg, who had lived in Bangkok as teacher for about a decade, had a fund of funny anecdotes and dry observations, spoke good Thai, and was absurdly attached to the yappy and demanding Spitty. He'd brought her down to the coastal port of Ban Phe, about three hours from Bangkok, by taxi rather than inflict on her the indignity of a bus trip.

And so by day we laughed and lolled about in the warm sea together, in the afternoon we retreated separately with our books, and by late afternoon were ready again to eat at Apaches funky dining area which boasted faux-American Indian carvings and a huge framed photograph of Elvis with the King of Thailand.

Some nights we would wander back up the beaches to choose fresh fish from the open barbecues and observe the tourists and Thai locals who were paying three and four times what we were to stay in the more pricey part of this sliver of paradise.

Greg had recently broken up with his long-time partner, a Thai man of whom he spoke with aching affection, and he would observe with sadness and quiet contempt the Thai boys and the European men who brought them here for a cheap and dirty weekend.

He would sometimes translate what the boys were saying between themselves about the Germans, Swiss and Australians they were there with. Money mostly, and the boys would snipe at each other about whose brief encounter had the most, or was the biggest, most desperate fool.

As the sun set behind us and the ocean turned blue-black we would drink Mekong whisky or Singha beer and talk about our lives.

Greg's had been happy: he loved his mother and brother, but felt he couldn't live in America. He was in his 40s and saw the world with clarity, knew the cruelty that could be meted out to a gay man in Middle America, and was much happier in the more humid and forgiving climate of Thailand.

He was now maybe between jobs because he thought this might be time to look for something else since the separation. He hoped for a reconciliation, but knew it wouldn't happen.

One perfect afternoon the people running the boat back to Ban Phe tried to rip me off on the ticket price. Greg stood quietly listening to the conversation between the laughing Thai boatmen. There was nothing I could do, then Greg weighed in. How dare they, he said in very loud Thai, take advantage of this fine and generous person who was a guest here, who had befriended many Thai people and was a good man? He laid it on thick.

The boatman scuttled away, I boarded and many Thai nodded an apologetic welcome.

I waved goodbye to Greg as he stood on the white sand, Spitty cradled in his large arms. He was laughing.

Off and on we corresponded by e-mail. I told him my relationship had ended too, his reply was caring and heartfelt. Then one time he told me he was back in Madison. His brother, always unhappy, had fallen into a deep depression. His mother wasn't well. He couldn't see himself getting back to his beloved Thailand for a while.

Then his brother committed suicide.

We exchanged e-mails about that. Greg was now extremely depressed. Madison in winter.

And then, much later, he told me he was alright. Maybe he'd go back to California where he had once lived. Maybe we'd see each other in Thailand again? Maybe.

I hope he made it.

He is very hard to miss.