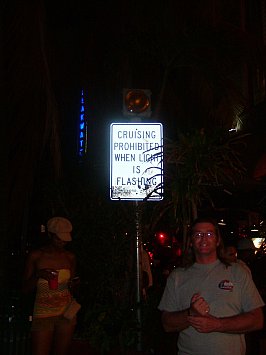 “This corner here?” says Marty. “These individuals would mostly be dealers or users. Crack mostly. That girl over there, the skinny one? That was her brother, the guy in the red shirt we saw earlier I told you was a dealer.

“And this girl here, when she was about 19, her boyfriend used to beat up on her. Now she’s using. What can you say?

“Hey, watch those black individuals by that phone box. See? See how they move away from each other when they see us? They’re dealing. We’ll just scope ’em for now and come back later.”

Officer Marty Garcia noses his squad car into a line of Thursday night Miami traffic and heads back towards South Beach. Beneath the crackle of his police radio the local classic hits station hums almost inaudibly. It’s Dire Straits’ Money For Nothing.

This is Garcia’s nightly patrol, the south end of Miami Beach which includes Ocean Drive -- where moneyed tourists spend up large in beachfront bars and restaurants -- and into crack alleys and rundown apartment blocks. Up as far as 17th St on the other side of the ritzy, redeveloped Lincoln Rd Mall, down into the narrow lanes around 2nd St. A lot of the time he’s “just scoping”.

And in this city where you can go a day and not hear a word of English, you don’t have to be bilingual to be on the force. But it helps if you can say, “Keep your hands above your head” in Spanish. Garcia, a member of the Swat team and with a brother on the force, grew up in Miami. He can say that, and does. Often.

“Yeah, we got everything here. Lots of narcotics, all your he-she prostitutes, robberies of tourists who just glow in the dark … A lot of individuals down here just don’t care about the law, they’ll just as soon pull a gun or run.

“We also have our homeless, and they aren’t as harmless as people think. We had an officer shot by a homeless guy. Just came up to the car while he was writing a report and bang! Blew him away.

“Lemme just pull over here and talk to these individuals. If I get into a foot pursuit you stay with the car.” 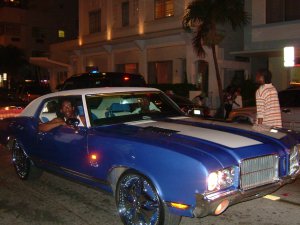 Garcia -- married for eight years and with two kids -- has been in the South Miami police for five years and loves it. A couple of times over this long, warm night he says he didn’t join the force just to cruise around. He wants to catch bad guys. And he does. Often.

The two white guys standing with their hands on the boot and their legs spread are among the dozen he stops and shakes down on this regular shift that ends at midnight.

“That short guy I pursued on foot three weeks ago and brought him down,” he says when he gets back in the squad car. “He was wired on crack, took off on a bicycle and ended up in hospital. Doesn’t remember any of it now. Tonight they’re clean, although they’ll score soon.

“I just want them to know I’m out, just scoping.”

We are driving back from checking out an alarm at one of singer Gloria Estefan’s houses on the exclusive Star Island estate when he suddenly guns the car, spins across to the other side of the highway and discreetly pulls back to pursue a green Pontiac. He hangs well back, runs a check on the plates, then passes it and deliberately slows down.

If the Pontiac slows to stay behind us something is up. It does. He waits for the plate check to come back.

“I noticed it had the back window smashed. That‘s often a sign the vehicle has been stolen.”

He‘d spotted the small broken window of the Pontiac in a line of cars speeding down a freeway in the opposite direction. Blink of an eye.

The car leaves his turf for Miami City but it is stolen as he suspected. He calls ahead. The radio plays Life in the Fast Lane.

Because it is raining across Biscayne Bay it is a quiet night. Dealers who usually come across from Liberty City have stayed home.

“Yeah, it’s quiet although the nights that start like that usually get wild at the end,” he says. He’s right.

Garcia’s world is dangerous, unsexy and, as his nerve-ending alertness suggests, anything can happen. However crime has been going down and while Miami might still be the cocaine capital of the United States the notorious Boobie Boys have been taken off the streets, the round-up including a former police narcotics officer.

The gang, they say, was responsible for most of the coke traffic from Miami into the United States, and an unknown number of murders.

Garcia makes a few guys on street corners pour out their beers, over a pasta he and his friends joke about the basketball game tomorrow night in which they play another precinct, he phones home to check on his daughter who suffered a bad reaction to a couple of ant bites, and back on the street he scopes two guys picked up by plainclothes narcotics cops.

Like all patrols, Garcia rides alone but back-up is an instant away. And there’s a shotgun hanging on a rack behind our heads.

He’s called to an incident in a dark shabby apartment near 2nd St.

A teary, scared Hispanic woman says her former boyfriend keeps driving past and threatening her. He’s got a gun and is driving a red Jeep. Her mother sits on the stoop in the warm breeze, her head in hands. The daughter repeatedly shouts at her in Spanish.

“He’ll come back,” says Garcia. “In domestic situations they always do.”

The radio plays the Doors’ Hello I Love You.

We cruise some more, he questions some dealers he’s busted previously, and a drop-dead blonde drives past slowly in a Cougar while he and a colleague are talking.

“She’s a crack dealer from Miami. Comes over regular.” 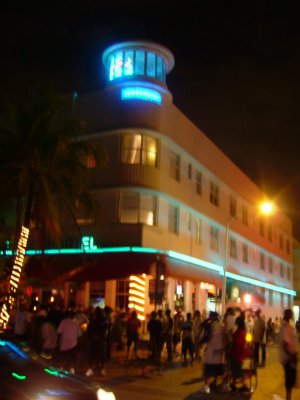 We’re in heavy traffic around 11pm when the radio crackles. A patrol has spotted the red Jeep. Garcia pushes his foot to the floor, the speedo leaps within seconds and the siren screams. We are rocketing down Washington, barely slowing as we power through red lights, scattering pedestrians and forcing cars to sudden stops. A hard right, then right again.

Ahead in a back street two squad cars are stopped, cops already out and behind their doors in a crouch with guns drawn and aimed at the rear of the red Jeep.

As we arrive so do two other patrols. Six cops now have guns trained on the vehicle, another crouches low holding a shotgun.

Garcia takes his position. They try English, then Spanish. The car’s two occupants don’t move. The scene is surreal, frozen figures under a swirl of coloured light from the squad cars, a couple of drop-down drunks on a stoop opposite are watching this like it was television. The night suddenly cools.

After agonising minutes the driver slowly gets out, the guns are up higher, the cops crouching lower. The skinny guy standing by the Jeep doesn’t say anything but a sudden movement, accidental or otherwise, could result in a hail of metal cutting him to pieces in the time it takes to blink.

He laces his fingers behind his head and backs slowly toward the squad cars. He’s grabbed, cuffed and pulled into a car. The guns remain up as the passenger slowly gets out.

It’s a young black woman in a colourful short dress who walks toward the police with her hands loosely at her sides, her skinny legs tottering on high heels. There is shouting and wire-tight tension.

There is more shouting, the guys on the stoop pull back up the steps. More shouting, she stops and looks around lazily. Everyone is yelling, I can hear a woman screaming in an apartment block and then see her face at an upstairs window.

After an age the woman in floral print dress puts her hands up, cops rush in and she is cuffed and tossed in the back of our car.

Garcia questions her a little then let’s her go. She’s a prostitute and the guy had only just picked her up. Other cops have cautiously surrounded the Jeep, their guns still drawn.

For the following half hour they stand about laughing about how the guy babbled on in Spanish and made no sense; about who still hasn’t got a uniform for tomorrow night’s game; about Miami Heat losing to the Nicks a couple of nights back … 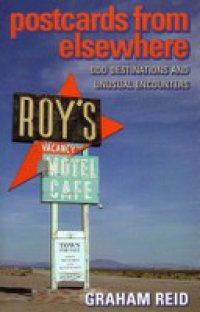 It’s around midnight. His shift over Garcia does a little paperwork in the front seat then drives back to the station. The radio is playing Who Are You? as he pauses briefly to question a couple of drunks on a corner.

He’s going home and figures his daughter might still be up. His wife will be waiting. She’d like him to get into real estate. He likes being a cop.

Two nights later I’m having an umbrella cocktail and a Macanudo cigar at a sidewalk table outside a bar on Collins.

This story appears in the travel collection Postcards From Elsewhere