In these days when people are losing their jobs, Stray Cats’ drummer Slim Jim Phantom seems to have more than his share: he co-owns the successful Cat Club on Sunset Strip where he usually plays Thursday nights with celebrity guests; is in The Head Cat with Lemmy from Motorhead; this year is getting together the Forgotten Saints with longtime friend Captain Sensible of the Damned which will drag in a different guest for each gig; and seems happy to pick up his drum sticks for anyone who calls.

“It’s true, but the Stray Cats trump everything,” he says from his home in Los Angeles, “that’s The Band. But we’re selective with what we do and plan pretty far in advance so everyone knows their schedule for the next year.

“The other things are harder to organise, the Captain is very technical but doesn’t return phone calls, and Lemmy is completely, you know . . . You have to go to his house and knock on the door.”

Not that Slim Jim has been playing much with anybody lately. Last year he fell off stage after a gig in Brixton and broke an arm in three places. It meant eight weeks in a cast (“I watched a lot of television”) and then doing what he was told by his therapist.

“That was the longest I’ve ever been away from making music, but the cast came off around Thanksgiving and I did a couple of shows with Lemmy. About five songs in I realised my arm hadn’t fallen off, so it was back into it.” 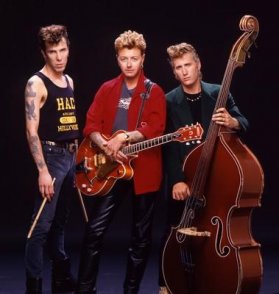 And now he’s back on the road with the Stray Cats -- with singer/guitarist Brian Setzer and bassist Lee Rocker -- the band that brought rockabilly, drape jackets and huge quiffs into the post-punk scene in Britain when they arrived in London broke but curious in 1980. They were different, immediately attracted attention, found a fan in producer Dave Edmunds, and cracked a string of classic singles with Runaway Boys, Rock This Town and Stray Cut Strut, all of which appeared on their self-titled debut album.

The Stray Cats from New York had found their natural home among the teddy boys and punks of London.

“We were doing okay in New York but we wanted to find people of a like mind and it really was just right place-right time. So when we got the opportunity to do gigs in London we were ready, we’d been playing five nights a week in New York.

“We really wanted to be teddy boys and we heard in England there were people walking around like that. We thought we’d step off the plane and everyone would look like that. We had no idea what we were in for.”

What they hadn’t reckoned on was a more angry cultural climate in Britain where the violence of New York seemed tame in comparison with punks and running fights between teds and rockers and whoever else came along.

“We could relate to crime like if you steal something and profit from it, that made sense. But in England, to fight over a haircut? We were oblivious to that, and I think that played in favour because our feeling, even now, is anyone with a haircut against the squares is trying to go outside the game.

“I don’t care if it’s a crewcut or a pompadour, it’s all alternative culture.”

One person who was crucial in their rise was Britain's Dave Edmunds, a fellow traveller with Elvis Costello who had come up through pub rock and loved rockabilly. Edmunds got them in the studio and produced a few of their key songs, he was their Sam Phillipps.

"Oh yeah, he was so impotant to us and we got a contract on the basis of a live show and that we were so different. But when we got to the studio, well I’d never been in one before. I was just 18 years old.

"Knowing how to get a sound let alone a good one was the issue. But Edmunds came to a gig early on and he understood us."Still does, he was there the night when Phantom fel off stage and broke his arm.

Slim Jim -- who grew up in a family where music wasn’t important -- was drawn to drums from an early age and admired jazz players like Buddy Rich.

"My parents were not music people but my dad had Hank Williams and big band albums, and my mum had the first couple of Beatles' records. There were a couple of Elvis records from his mid-period. Nothing very special but then you expand on that.

“I discovered rockabilly later and thought, ‘This I can do’. But play like Buddy Rich? No one ever could be that good. And the other guys who I’d known since we were children also thought rockabilly was something we could actually do.”

He acknowledges when starting out they had little idea of the history of 50s rockabilly and only later came to recognise the pure American-ness of it and its rich legacy.

“Everything since has been influenced by it to some extent. It influenced the Beatles and they influenced everyone since. That I got afterwards.

“I think the Stray Cats made rockabilly more accessible and available. Before us you really had to root around in old record stores to find it, but now with the Cats it’s a bit easier to access Gene Vincent.

“And there are always kids who want to seek out something alternative which is not on the radio, even alternative radio. They want to dig deeper into the roots of things and if you do the research in rock’n’roll you find rockabilly.”

Since their peak in the early 80s the Stray Cats endured declining fortunes, notably in record sales. They still toured but never quite captured that early magic on record. In 1984 they broke up and since then there have been occasional re-formations.

Phantom (real name James McDonnell) made his own headlines: he was married to the Swedish actress Britt Ekland from 1984-92. She was a former Bond girl, former wife of Peter Sellers, and longtime partner of Rod Stewart who wrote Tonight’s the Night about her.

But while he was otherwise pre-occupied with women, opening his club, playing in other bands and so forth, life also went on -- off and on -- with the Stray Cats. He acknowledges that when the band plays these days there is a nostalgia factor for much of their audience.

“It’s like when the Rolling Stones of Elton John play. The new kids want to get down in the front row but then there are the people who have been with us since the beginning and maybe they have a normal life now compared to their wild youth.

“But they will still want to go to a few rock shows every year -- and that takes them back to a good place. We see a lot of people who bring their kids who have little quiffs and are wearing the original shirts that used to fit the old man probably. That’s a positive thing about rock’n’roll, it crosses a bunch of boundaries, age being one of them.” With such a broad demographic -- those hearing their retro-music as something new, those into the nostalgia factor -- it is little wonder the Stray Cats manage to find an audience each time they go out. But there is another factor also, the Stray Cats only get together and tour intermittently these days.

“I think we’ve been a little bit smart in making it exclusive. A lot of groups play too much and that’s the battle, because you like doing it and like being on the road. But you can’t burn it out.

“So you become a little bit more legendary by doing it this way. And there are always people who want to see something a little more alternative, something that is not on the radio, even alternative radio.”

That audience may not be huge but they have hit a comfortable level of touring which works for them and the promoters financially.

Not that he waits for the Cats, he’s a busy man. Except when he broke his arm. Sitting around watching television, eating pizzas, turning in to Fat Jim Phantom?

“That can’t happen no matter what I do, it just doesn’t work. I can eat burgers and pizzas forever.” he laughs. “I have a natural level of stress.”

Curious layers of strange nostalgia fold into themselves at a Stray Cats gig. After all, here’s a band which, when it emerged almost three decades ago in Britain’s post-punk era, drew on a musical style from more than two decades prior to that. It makes you wonder who goes to their shows, and for which piece of nostalgia?

Most bands like to claim they have a wide cross-section in their audience, but for the Stray Cats at the Powerstation that seemed true: a guy in his 20s wearing a Johnny Cash t-shirt, longhairs and those in their 30s with shaven heads, women of all ages, old time rock’n’rollers with quiffs or balding, post-punks who remember Stray Cat Strut, Rumble in Brighton, Fishnet Stockings, Rock This Town and Runaway Boys from 1980, people there to party to songs which are all vaguely familiar . . .

Lots of layers of various forms of nostalgia. But on stage this long-standing three-piece play this rockabilly rock’n’roll grounded in the late 50s as if it is the most important music happening right now.

At his minimal kit Slim Jim Phantom hammers out elemental rhythms or plays like Sandy Nelson on speed, on upright bass (the most beautiful to grace a New Zealand stage) Lee Rocker uses the thick strings like percussion to pull out a driving pulse, and in the middle the slightly paunchy singer/guitarist Brian Setzer delivers what we might call “strum und twang” which is as sharp as a stiletto.

The Stray Cats work a narrow but remarkably deep vein: it obviously refers to its heroes Gene Vincent and Eddie Cochran, but in Setzer’s playing you can hear echoes of Chuck Berry, Link Wray, Elvis’ guitarist Scotty Moore and Duane Eddy. But he also draws on country players such as Johnny Cash, Marty Robbins and Chet Atkins.

Add that to their original material and deft acknowledgements of similar music by contemporaries (the late Ian Dury’s Sweet Gene Vincent) and this gives depth to what could otherwise be just another oldies rock’n’roll revival show.

Initially Setzer’s vocals sounded a shadow of themselves but as the night progressed he got stronger and on their terrific but largely overlooked Gina (“don’t you run with him”) he conjured up the spirit of that era when bad boys wanted to make good for their girlfriends, and maybe take them to the drive-in.

Yes, there is weird nostalgia at a Stray Cats gig, but in 70 short, fat-free minutes (with a 10 minute encore) it all went by in the blink of an eye and rockabilly music from the 50s and 80s merged seamlessly. From the Yandall Sisters, Māori showbands and Mark Williams through to Aaradhna repurposing Motown and the R'n'B of Vince Harder, Black America's music has long been a reference point for local... > Read more