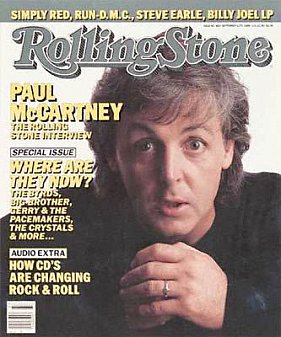 Paul McCartney closed the Seventies much as he had started it: with the low-key self-titled album McCartney II which deliberately tried to downplay expectation and evoke the charm of his debut solo album McCartney in 1970.

Quite where he might have gone after that was an open book, but the decade had been one of diminishing musical returns after the excellent Ram in 1972, the runaway success of Band on the Run and then the stadium shaking days of Wings.

If he had been ready to leap forward again the plan was put on hold when John Lennon was killed in late 1980. McCartney retreated and it wasn’t until almost two years later he emerged with an album which included, as it had to, a song in tribute to his fallen comrade. It was a tentative start to the Eighties, a decade which saw him gradually grow in confidence again -- although by now he’d been a round long enough for people to steadily turn off.

A pity, he made some interesting albums as you may see . . . Signs of melodic life again (the title track, the lovely Here Today to the late John Lennon) and the hits coming back (the enjoyable Ballroom Dancing, and the schmaltzy but popular Ebony and Ivory with Stevie Wonder, the latter proving he was looking around for ideas or associations -- or just something interesting to do in his spare time).

Wings were now consigned to the past and with producer George Martin again on hand this album had a coherence which had been lacking previously. It is also orchestrated in an interesting way which elevates it.

A hugely popular McCartney album (it included Ringo on one track, and Wingman Denny Laine) but it hasn’t stood up as well as it might have. The lightweight pop (Take It Away) which was rapidly becoming his default position is never helped by trite lyrics and you just wish those easy melodies (Somebody Who Cares, Wanderlust) actually said something. The Pound is Sinking could have been so much better if he'd had a co-writer to say "No!" to lines like "you can't see the trees for the forest".

The electro faux-funk of What's That You're Doing with Stevie Wonder and Roxy Music's Andy MacKay is the one to check out though.

Actualy it was a more than decent album which seemed to indicate an effort being made. 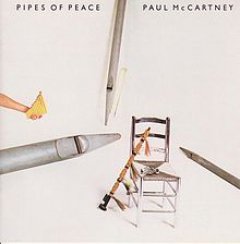 More of the same but less so, and hardly surprising given some of the songs were held over from the Tug of War sessions.

Guest this time is Michael Jackson (Say Say Say, The Man) and there is a duet with fellow bassist Stanley Clarke on Hey Hey. But no hits or major rediscoveries here aside from on the CD reissue We All Stand Together, the theme to an animated Rupert Bear movie.

Customary melodic gifts elevate So Bad -- and The Other Me deserves a re-hearing -- but many of the mid-paced songs here are uninspired. Just another popular but indifferent Paul McCartney album despite Ringo, Jackson, Roxy Music’s Andy MacKay and others.

Try to find the 12" of Say Say Say though which has Jellybean mixes and McCartney's . . . Ode to a Koala Bear?

The creative slide of the Eighties started here and McCartney was devoting an unnatural amount of time to his most ambitious project of his solo career: a film with tie-in soundtrack called . . . 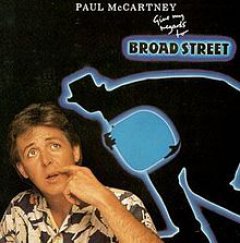 McCartney’s film of the same name was idea-thin, tedious and overlong. Critics hated it, most of the audience stayed at home. McCartney valiantly defended it and did massive talk-show/interview publicity (still asked about a Beatles reunion despite the obvious reason why it couldn't happen) but gave up and the following year admitted he didn't like the film (a kind of Hard Day's Night jape about looking for some missing master tapes) much either.

But the soundtrack taken by itself was surprisingly good, given he dared to revisit his Beatles’ songs Good Day Sunshine, Yesterday, For No One, Here There and Everywhere, Eleanor Rigby and The Long and Winding Road. All very creditably.

Of the newer reworkings Ballroom Dancing and Silly Love Songs raise their heads, and So Bad remains one of his loveliest melodies. Maybe a few too many versions of No More Lonely Nights on the CD reissue (five in total, including an Arthur Baker dance remix). Patchy as always but his orchestrations -- especially effective on Eleanor Rigby -- pointed towards something more ambitious. An oratorio, perhaps? Since about London Town sensible people had largely given up even offering McCartney the benefit of the doubt and that this album contained no hits (once his stock in trade remember) came as no surprise.

Things were still at a low ebb, although there were more genuine signs of an effort being made (the surreal, busy Talk More Talk co-written with former 10CC man Eric Stewart and given a soundswell courtesy of producer High Padgham).

A more live sound, Stewart acting as the lyrical foil, a rediscovery of energy (Press). In retrospect this was one of McCartney’s more interesting outings in the Eighties and which (like Red Rose Speedway a decade before) paved the way for one of the few essential albums in his vast catalogue. But before then . . . 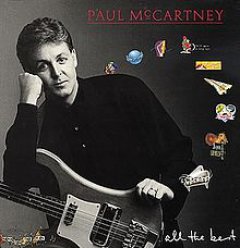 Another hits collection which came in different versions in the US and UK, and which included some songs which weren't hits but could be counted among, if not his "best" then -- in the case of C Moon, Listen to What the Man Said and others -- were among his more interesting.

The CD reissue version is different again from the vinyl (his excellent Maybe I'm Amazed from that self-tiled debut solo not included).

But even the most casual of McCartney buyers would have had much of the material -- which is perhaps why the temptation for British loyalists was the new single Once Upon a Long Ago.

A stop-gap measure it seemed. 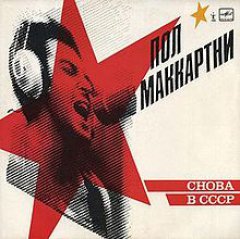 On the original Russian-pressing vinyl this is a collectors item. Released on the Melodiya label for Russian fans only (then reissued in '91 worldwide with an extra track), this was McCartney going through rock'n'roll oldies that had influenced him -- Kansas City, Twenty Flight Rock, Lucille, Summertime, Just Because -- and came under the title which translated in English as, yes Back in the USSR.

Truth to tell it is slightly uneven and he barely seems commited on some tracks: but others such as Fats Domino's I'm Gonna Be A Wheel Someday, the echoed That's All Right Mama, Little Richard's Lucille where he tears into it are very good.

The CD reissue in '91 is the 14 song version and well worth checking out. He could still rock when wanted to, and maybe it got his energy up for what would follow. 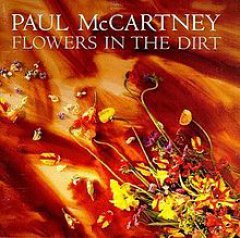 Widely considered as the great overlooked McCartney album (although it did spend a week as number one in the UK charts) this certainly stacks up strongly although in the rush to acclaim it many overlook the weaker tracks.

Working with co-professional songwriter Elvis Costello, Macca couldn’t get away with the lyrical sloppiness of his past misdemeanours. (Costello is on record however as saying Macca was pulling him up on lyrics which shows Paul was back in the game.)

He also plays Beatlesque bass, crafts echo-hardened rockers, then watched as his excellent Figure of Eight single was ignored. But at least he sounded like a contender, not just a perfunctory craftsman. To collect the McCartney-McManus (ie Costello) tracks from this, Costello’s Spike and Mighty Like a Rose, and McCartney’s later Off the Ground gives a fascinating insight into two different writers coming to the same genre.

Flowers in the Dirt is one really worth seeking out: a little edgy and a little angular but plenty of pop-sensible songs. It was a fine album to tour on and within a few months he was off on a massive stadium-filling jaunt that recalled the successes of Wings. Typically to drum up publicity he announced that the Beatles might tour again which prompted George Harrison's famous statement, they wouldn't "so long as John Lennon remains dead".

Still, if McCartney started the decade a little wobbly, he ended it in style. 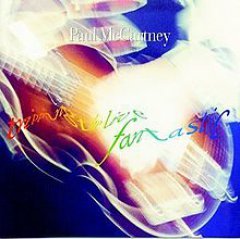 Although this might more properly belong in the next decade given the date of its release (November '90 in two versions; a thumping triple vinyl and a "highlights" double disc) it is useful to consider it as part of his Eighties career: this was a stunning snapshot of his pulling power in concert, and in many places his rock'n'roll chops.

The triple vinyl included soundcheck material, some interesting Beatles-period songs (Things We Said Today), his Wings and solo album songs right up to My Brave Face. And the old Don't Let the Sun Catch You Crying which Merseyside pals Gerry and the Pacemakers had once had a hit with..

And so McCartney closed this decade on a higher note than he had the Sixties (when he quit the Beatles -- after all the others had -- in rancour and litigation) and delivered the lightweight but promising McCartney album. Or when he had left the Seventies when he abandoned the notion of band, Wings, and left amid rancour but sidemen too poor or damaged to engage in litigation with the McCartney II album which revisited its earlier version.

And what would the Nineties hold?

To read of McCartney's solo career in the Seventies go here. 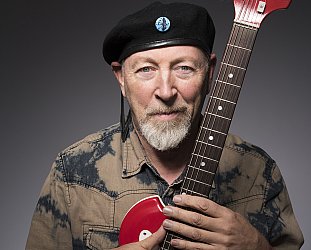 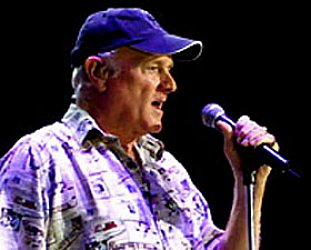 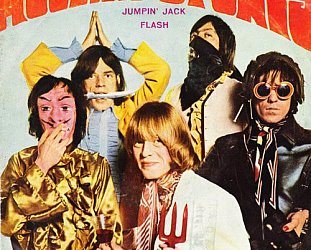 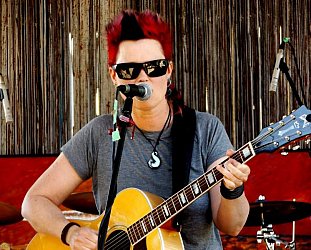