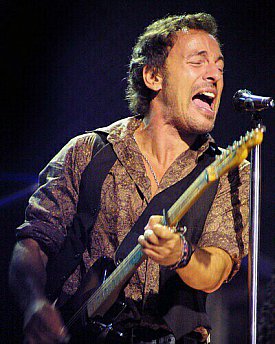 Bruce Springsteen won't forget his show at Sydney's Cricket Ground last Saturday. He said so repeatedly and meant it.

Losing power in a show can never be discounted as a possibility. But losing it twice would suggest alarmingly bad luck or poor technical support. Losing your stadium rock thump four times in the first hour, however?

Well, that makes a show memorable.

The first time Springsteen and the E Street Band were rendered mute was during his second song, War - the air-punching and appropriate anti-war statement - and the sudden silence deflated the early anticipation and whoop of the almost-capacity crowd.

But where Marilyn Manson might have thrown his teddy bear and Queens of the Stone Age walk off without explanation, Springsteen and guitarist Steven Van Zandt collapsed with laughter into each other's arms. Saxophonist Clarence "The Big Man" Clemons and Springsteen's wife and guitarist, Patti Scialfa, stepped to the front of the stage to get the crowd clapping and singing along, "War, what is it good for? Absolutely nothing."

When the sound returns the band do not miss a beat - the mischievous-looking, diminutive guitarist Nils Lofgren a Mini B at Springsteen's side - and the show roars into the rocking No Surrender, then the emotionally uplifting title track of Springsteen's post-September 11 album The Rising. The set steadies itself and by Lonesome Day the sweat is pouring off the man some still call The Boss.

After the second sudden loss of sound - more laughter and Van Zandt menacingly leaning over the sound guy like Silvio Dante, his character in The Sopranos - Springsteen jokes that this was the recurring dream he'd had.

"But my analyst told me it was just a dream," he laughs.

The bad dream halted their performance twice more - the animated and amusing Van Zandt, a show in himself, at one point sitting down and talking with the front row - and at the end when he vamped lyrics in the style of a rock'n'soul revival show Springsteen promised, "Tomorrow's gonna be a better day ... and someone's gonna get get fired.

Oddly enough, while these problems disrupted the momentum and long arc of the show - a performance of tension and release ending in uplifting, celebratory rock'n'roll - they didn't detract from a crowd-pleasing performance which ran three-and-a-quarter hours, with Springsteen off stage only a few minutes in that time.

By way of thanks to an audience which sang his songs back to to him through each power failure - sudden, none more than a minute - he spontaneously called up a few oldies the band hadn't played in a while. At that point it was obvious what a consummately professional unit the well-drilled nine-piece E Street Band are, violinist Soozie Tyrell dragged to the front for an impromptu duel with The Big Man.

Some might say an outdoor Springsteen show these days epitomises the bombast of 80s stadium rock, although that accusation wilts when Springsteen makes his performances so personal and obviously enjoyable. And when they pulled out the hoary old bar-room rocker Ramrod you were reminded of their journeyman Jersey Shore origins in clubs and battered ballrooms.

But Springsteen and the E Street Band have come a long way in the thirtysomething years since, and although the set reached back to that time for an impromptu Rosalita, it was also as current as today's headlines when he included moving material from The Rising.

One of Sydney's hip street-press magazines not only snubbed commenting on Springsteen being in town, but suggested where else you could go to avoid him - Beck, as it happened. But that cynicism misunderstands what Springsteen's shows are about.

Springsteen is a cypher for the affirmation of faith in rock'n'roll redemption ("We learned more from a three-minute record than we ever learned in school" in No Surrender) and increasingly - especially in songs from The Rising - the curative and cathartic power of music.

When he sings "I woke up this morning to an empty sky" it is both about and beyond the events of September 11. On The Rising these songs sound forced into the context of a CD, in concert they co-exist with songs of affirmation and healing from all points of his career and make better and bigger sense.

Springsteen is also a man of his post-Vietnam generation, so when he sings Born in the USA - in Sydney his opener done on bottleneck slide guitar as a mournful, regret-filled country blues - it encapsulated the disillusion of the Reagan era when it was written. Understandably that doesn't mean much if you were 2 years old when it came out in '84 and are now going to dance clubs or Beck - but Springsteen audiences are predominantly those who remember those chill years of Reaganomics and its various offshoots. It means something just as powerful now about the current disillusion.

And when he stepped forward for two songs from The Rising with Scialfa at his side, there was a palpable solemnity. To silence an audience in a sports stadium with just guitar and voice is a rare skill and says much about the undeniable power of his emotionally affecting songs. For him as much as his audience. When Danny Federici's organ solo cut in on the holy sound of You're Missing the look on Springsteen's face was as if he was hearing it anew and for the first time fully understanding it.

In a performance which went from flat-tack rock (Glory Days, Badlands, Backstreets and Thunder Road) through poignant or populist pop (Bobby Jean, Dancing in the Dark) and his new party-rock song Mary's Place, which sounds like it was written around the time of Rosalita, Springsteen still banners the belief that rock'n'roll can heal the pain of life through its sheer celebratory quality.

It's rock'n'roll redemption from the man who sings "Well, I got this guitar and I learned how to make it talk". And so he does.

Of the new songs, the title of Countin' on a Miracle speaks for itself. But even My City of Ruins - apparently written about the Jersey Shore inner-city development but taking new life post-September 11 - has as its chorus "rise up" and Lonesome Day promises "It's all right".

And it is all right. This was a rock show against the backdrop of nations at war, and he said thoughts were with the American and Australian soldiers and innocent Iraqi civilians.

Maybe it was a mere distraction or diversion from those terrible events, but people cannot live with tragedy all the time. "This too shall pass," he sings on Lonesome Day and it could mean anything: The job you hate, the pain of the separation you are going through, the loss of a loved one, or a world going to oil-fuelled hell in the fires of ignorance and anger.

Springsteen's songs can be that ambiguous, that universal yet simultaneously personal.

They come from a man who writes himself and his generation into them and gives himself away on stage, whether it be through sweat-drenched passion as the new Man in Black, an inheritor of Johnny Cash's mantle speaking for the dispossessed and voiceless, or by his self-effacing humour which humanises a performance in front of thousands of anonymous faces in the darkness.

"This earns me credit points around the house," he quipped as he did a sexy shuffle towards Scialfa.

She offered a bemused smirk, an expression which says, "Who are you kidding? You're not The Boss of me."

After yet another sound failure he laughed and warned the audience not to use their cellphones, said that they had people going round the nearby suburbs telling people not to use their hairdryers. He made light of the problem - and the band played on. And on, and on. 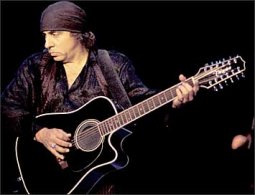 Somewhere around the two-hour mark he makes like he is leaving the stage then, almost as an afterthought, grabs the mike and says, "We can't go home now just as we got this shit workin'." They play for another hour. Three and a-quarter hours on stage?

As a performer The Boss' energy is undiminished. At 53 he still sprints across a stage and slides on his knees to the feet of The Big Man for a sax solo, can still pogo and play at the same time.

Yes, a Springsteen stadium show may seem an anachronism these days, a throwback to the Eighties. But, even putting aside his rare passion as a performer and the strength of his band, his songs alone would carry the weight. They have written themselves into people's lives, convey the aspirations and failed dreams of his audience, whether real or imagined.

In Sydney the power may have gone, but Springsteen still had it. 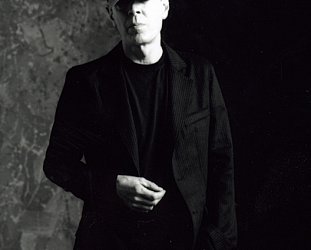 Named after the late Dylan Taite, one of New Zealand’s most respected music journalists, the award recognises outstanding creativity for an entire collection of music contained on one... > Read more