The release of any Beatles album was always an occasion, so 25 years after the band broke up, the plush ambience of the Lancaster Room in the Savoy Hotel doesn’t seem inappropriate for the launch of The Beatles' Anthology 1, a collection of out-takes and unreleased material, the first of a series of three double CDs that effectively mops up the Mop Tops.

But with 200 invited journalists from around the world and security more befitting a Middle East peace initiative, there was something just a little disconcerting about this album launch. This is about music, but equally it’s about marketing, so when the barrage of camera crews are told to turn off their equipment for the first screening of the video for the new Beatles song Free as a Bird - a John Lennon song to which the other Beatles added their parts - it’s not because someone might get a free copy of it, it’s because ITV has negotiated the exclusive first-screening rights.

Music might be in the air, but money isn’t entirely absent, either. So security is tight and the whole thing taken … too seriously perhaps?

“I take everything seriously,” offers former Beatles producer George Martin, a dignified gentlemanly presence among the flashbulbs and elbow-jostling of the circling media. “It’s not Bosnia - but it is important because people do like Beatles music and when you add up the amount of joy those four people have given the world every day, every month, every year since 1962, that I think you can take seriously.”

Martin is right, of course - as he usually was about the Beatles, whom he still calls “the boys”.

If there is an excuse for the media frenzy, it’s that, since the Beatles’ passing, pop music mutated into rock and fragmented. These days it’s impossible to imagine any band covering as many demographics as the Beatles did in their heyday. Indeed, few people can command such widespread attention any more.

In “showbiz” (the Independent on Sunday's term) their only serious competition for media space was the latest revelations by “the manipulative and partly mad” Princess Di (Taki in the Sunday Times) who, as Rhoda Koenig in the Sunday Times’ Style section noted tartly, derives all her power from a man and whose appeal is no different from that of the girl who dates the football captain and then becomes very, very popular.

As John Lennon said somewhat disingenuously, they became very, very popular, too - but at least the Beatles were relying on natural talent. Polished up by producer Martin, to be sure, but that rare combination of talent was theirs alone, as Martin reminded us.

What the high security at the Savoy this week was protecting, however, wasn’t their finished product but the working drawings. As has been noted, this collection of oddities and out-takes has been gathering mystique for decades but on paper, at least, they don’t sound too promising: five songs from the Decca auditions in 1962 (which they failed), material they rejected as unfit for release, songs with false starts, or live versions of familiar classics such as She Loves You, Moonlight Bay with Morecambe and Wise and so on. Even Free as a Bird comes from 1977, a period few would claim to find Lennon at a creative peak.

Martin - who is producing the Anthology series but left Free as a Bird to former Electric Light Orchestra singer/writer Jeff Lynne - picked up the theme.

His role has always been to present “the boys” in the best light, maybe he was wrong sometimes, and these pieces have a charm of their own, he said. That much is true.

For aficionados and the curious, what Anthology 1 contains is suggestions of the works in progress up until 1965, and subsequent collections will doubtless be more interesting as the song writing and studio production became more ambitious. “All is not revealed quite yet” said Martin with a grin.

And the Beatles certainly took their audience of the 60s on a journey. It was a mere four years from “I wan to hold your hand” to “I’d love to turn you on” (in A Day in the Life on Sergeant Pepper’s Lonely Hearts Club Band). For a generation each Beatles album took it somewhere different, so fortysomething news editors today - decision-makers on what goes on those newspaper covers and the 6 o’clock news, hence perhaps the high-profile stories - measured out their lives in Beatles songs. We can only begin to imagine what it must have been like for the Beatles themselves.

“At the age of 17 I was in Hamburg,” said a greying Harrison in a short interview clip screened at the Savoy, “and by the time I was 23 we’d done Sergeant Pepper’s and I was in the Himalayas. That’s how my life went - from being a schoolboy in Liverpool to the Himalayas in five years.”

The opportunity to ask them how they feel about their legacy now - or indeed about the contents of the Anthology album series and comprehensive television documentary they took part in went begging, however. None of the surviving Beatles turned up at the Savoy for this curiously joyless affair. And there are other questions left hanging.

Difficult though it may be to believe, there is a suggestion the reason for this release of Beatles material now may have less to do with posterity (as Taylor and Martin advance) than with impending impecuniousness. Word is out that Harrison (who once said if they ever got together again it would be because they were broke, and has always distanced himself from the Beatles legacy), is down to his last multiple millions.

Paul McCartney, of course, is well flush and Ringo Starr can’t be doing too bad since he’s taken to doing ads for a pizza chain on American television. But Harrison’s stately home at Henley-on-Thames may be up for grabs since his HandMade Films company - responsible for early successes such as Monty Python’s Life of Brian but also commercial nosedives such as Shanghai Surprise - was sold at a knockdown price of $NZ13 million. He’s also suing his former friend and business manager for $38 million.

Suggestions along these lines at the Savoy met polite and chilly denial by a purse-lipped Derek Taylor. They also appeared unseemly in the context of questions about art.

Most attention therefore settled on Free as a Bird, which Yoko Ono had passed on to McCartney in a gesture of reconciliatioin and which Jeff Lynne polished up from a rough casette. And a song which, as one inquisitor put it, bore some production similarity to the Travelling Wilburys, the band in which Lynne plays with Harrison.

For Lynne, a man who always wanted to be a Beatle and has at least been honest about it, this was his day. He sat beside his idol George Martin, posed happily beside a replica of Ringo’s drum kit for photos and could allow himself a little swell of pride as the sound of Free as a Bird resounded through the speakers. It it, if nothing else, a remarkable production job. And the song is accompanied by an equally extraordinary, state-of-the-art video.

When the brief question time was over, Lynne shook hands, and amid the scrum of television cameras and journalists, answered a few quick questions.

Less happy was the elusive Neil Aspinall, a man who went to school with the Beatles and graduated into managing their Apple Records label on which the anthologies are released.

In his first ever interview and equally rare public appearance, he offered little but dry Liverpudlian wit. When asked if Yoko Ono might have anything else in her bottom drawer, he shot back: “We don’t know what Yoko’s got in her bottom drawer.” It was a fleeting moment of levity in an otherwise short, serious and security-conscious morning. Within minutes of the press conference’s ending, Aspinall, who could pass unrecognised on any London street with his woollen hat and scarf wrapped around him, was out of the room. Martin and Taylor stayed marginally longer.

But inevitably, business aside and essays about the Beatles Generation having been written, the interest comes back to Free as a Bird, a song that aches with sentimentality and about which Ringo - who once gave the world the benefit of his wry humour ut now appears tired of the whole thing - says “it sounds like the bloody Beatles.” And it does. The superb video is like a journey back through time to a more innocent age when the world was full of promise. It hints at things to come while the song is reflective. The juxtaposition of both is moving.

Maritn is right when he notes the years of pleasure given, the lines on Harrison’s face today tell of a personal cost that others can only guess at. Regardless of its intrinsic musical quality - and George Martin echoes everyone’s belief when he says it will be a number one all the world at Christmas, but will be drawn to evaluate it only as “a good song” - Free as a Bird may well act as a coda for the Beatles as much as their generation.

As the song says: “whatever happened to the life that we once knew, can we really live without each other, where did we lose the touch that seemed to mean so much - it always made me feel so free …. as a bird.”

That reflectiveness finds its counterpoint in a comment by Harrison about the whole present project. “The Beatles will just go on and on in videos and films and books and whatever and in people’s memories,” he offered somewhat ruefully.

“The Beatles has become its own thing now - and the Beatles exist without us.” 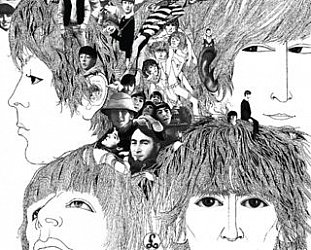