TYSON KELLY INTERVIEWED (2015): He is the walrus If we were in England – and believe me, he does an excellent Liverpudlian accent – then we might say, in the phrase much favoured by British bobbies, that Tyson Kelly has some “prior form”.

Kelly from LA, who plays John Lennon in the acclaimed stage production Let It Be which opens in Auckland soon (see dates below), has been playing Lennon for years in various productions.

He's got the gear, got the voice, got the accent and even from the audience's viewpoint got enough of the look do a very persuasive Lennon.

He was also a Beatle fan as a teenager and comes from a family where his father Tom – inducted into the Songwriter Hall of Fame in 2011 – wrote hits for Cyndi Lauper (True Colours), the Bangles (Eternal Flame written with Susanna Hoffs), the Pretenders (I'll Sand By You written with Chrissie Hynde), the Divynls (I Touch Myself), Madonna (Like a Virgin) . . .

So more than just acting as Lennon, Kelly has music in his bloodline and outside of the Let It Be show he has his own band King Washington which has a couple of albums under its belt and are really very good (in a non-Beatlesque way).

In the past Elsewhere has interviewed a George Harrison (here) so why not chat to a John Lennon? Because the man has “prior form” as they say. Hello Tyson, thanks for taking the time. Where are you at right now?

We're on tour, been on tour for about eight weeks now and we're somewhere in Canada right now on our way to Prince Albert.

Great. I know I don't have much time and I'd like to speak about King Washington later on if we get the time . . .

Oh wow, you know King Washington, thank you so much.

Well, it's what you do and I really enjoy that music, but we should first address the matter in hand which is the Let It Be show. You've been in prior Beatle shows so just clarify for me the chronology of those bands like the Apple Band and the Fab Four. So when did you first start being John Lennon on stage?

When I was 17 I started going out to karaoke bars, under-age of course . . . but it was all for the best. I started doing Beatle songs and John Lennon was a big idol of mine during high school years. I went through the whole catalogue and was obsessed and really fascinated by John, his persona and everything about him. And obviously his songs.

I really connected with him so started singing Beatles' songs at karaoke bars and started getting good sounding like him, and intentionally beings as good as I could get. Never thinking that one I might make some sort of living out of it.

So for years I did karaoke and then when I was 21 I was working as a server at Johnny Rockets and I got a phonecall from my Buddy who said, 'Hey there's this John Lennon play and they're looking for an understudy and I thought of you'. So I went in and I ended up in West Hollywood meeting the John Lennon who was pretty successful – one of the bigger Johns – doing this show called Just Imagine.

I started being the understudy for that show then I got connected into the Beatle world.

There is the whole network of Beatle guys who are interested in anyone who is new . . . and if you are any good your name gets out there pretty quick.

So I got my foot in the door with that show and before I knew it I was getting calls for bigger shows like the Fab Four, Classical Mystery Tour and so on. They would flying me out to join them. I had to buy all the suits and I saved up and bought all the wardrobe stuff like wigs and guitars and amps.

Within a couple of years I was able to survive off doing that.

And off on the side – which became more of a priority – was King Washington, and we've done that for 10 years.

Interesting what you say about meeting all these others Johns and so on. Is there a cabal of Beatle people and you get to know each other?

Yeah, there are. We all talk about all the other Johns and Pauls and Georges when we are gossiping, but the thing we never get to do is hang out with our respective Beatles. Johns never get to hang out with Johns or Georges with other Georges. You never need two of the same Beatles on a gig!

So I never really meet any other Johns. But I know so many Georges and Pauls . . .

There are guys in their 60s doing it, you know putting on the wig, and that is actually the majority of the working Beatles. They are all older and twice the age of the Beatles most of them.

That's because they were the ones who started doing it and they have the gig. 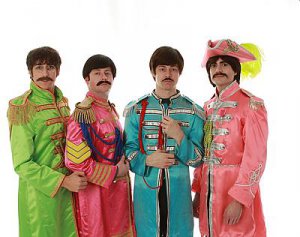 But he said when he first started doing it that it was very hard to get the authentic equipment and clothes, has that been less of a problem for you because all the replicas are out there now?

Yeah, there's a website you can get all the early suits on but no one really does the Sgt Peppers suits, you have to get them custom-made.

There are a couple of Halloween stores that sell a version of the basic suit but you have to find all the trim and so on, and that can cost $1000. The 325 Rickenbackers are hard to find, the early John one with the small neck and body, but if there's a will there's a way.

You did this Let It Be on Broadway, were you in the London show?
No, I'd love to go there but they have a London cast which is more affordable for them. But I get all the gigs for Let It Be that happen on this side of the pond, and going to New Zealand after this tour which will be fun.

Briefly tell me a little about the show without giving too much away. Does it follow a narrative, and you speak as John Lennon to guide the show?

Oh yes, we all stay in character throughout the show until we take our bows and wave, out of character! You put on the accent and [in a perfect Lennon voice] you've got to get it right, 'and now we're going to do Rock'n'Roll music' You've got to be in character because you can't get round it otherwise.

You are a film graduate and have made films and written them, so I imagine you see yourself not as an impersonator but more of an actor in a role?

Yeah, I have definitely been interested in theatre in my entire life so being an actor is one of my passions and I can connect with Lennon on that level. I just happen to be a musician as well. I do wish the show had some more acting scenes where I could enter stage right, and there is blocking and so on. 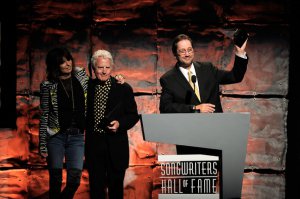 You grew up in a musical family and I've read what your father Tom (pictured at podium with Hynde and co-writer Billy Steinberg at the Songwriter Hall of Fame in 2011) wrote. My God!

It's funny actually, he stopped writing or being as productive right around the time I got into music seriously when I was 18 or 19. By then he had kind of retired but as a kid I would hear the playbacks from his room when I was over visiting. If I was five years older I might have caught the tail end of his career and maybe we'd have started writing songs together. But golf is his agenda these days.

Even as a kid you would have been aware who he was, the guy cranking out hit singles for people.

I don't know if I realised it or not. I knew everybody knew his songs. As a kid I thought that was cool. It was good to brag about in school. I'm very proud of him but there was a point where it was, 'Oh come on man, why did you bring it up?' from other kids. It would be like being Jm Carrey's daughter or something.

If we could all write a song like True Colours and hear Miles Davis cover it we'd all die happy.

(Laughs) Right. Did he cover that? Wow.

You are John Lennon for a significant part of your life, what percentage of your time can you devote to King Washington?

This is a big tour we're on now and the most I've devoted to a Beatles project, but I'd say 75 percent of my time is spent writing and rehearsing with King Washington. We went round the US nine times last year and I turned down a lot of Beatles work last year, probably about US$50,000 worth of Beatle gigs.

Hopefully King Washington will be the bread and butter but it's harder than it is 10 years ago. But we are slowly stacking it up and we are slowly trying to 'make it', I guess. What's King Washington's profile like in the US? You play at club level?

Yeah, we play 300 seat clubs. By no means are we successful at all but in terms of making a living out of it the band hasn't lost money on tours. Now we've got an agent and new management so there is a buzz going. We stayed in New York for a month last August and got a buzz going there for us, then did the same in Milwaukee and Chicago last October and November. We do these residencies in places to get an organic buzz in these cities around the US in the Midwest, East Coast and West Coast.

When you write for King Washington do you have to correct yourself on chord changes and say, 'I can't do those, that's a Lennon sequence'?

Oh no. I am a very strict songwriter and allow chord progressions, and obviously we have an influence from the general Sixties era because we have so many harmonies, but that was timeless music. We are just three guys singing with two guitars and are trying to orchestrate beautiful music out of a simple set-up instead of having to rely on production which is what a lot of hit songs do these days.

Last one, very quickly: your two favourite Lennon songs which you either do – or don't do – in the show?

In My Life is my favourite and I've always been really connected to that song. And A Day in the Life.

And are both in the show? 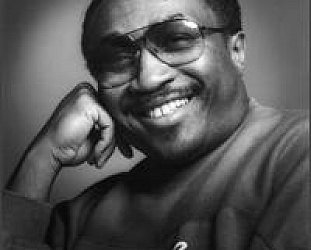