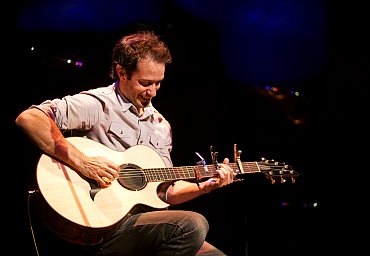 There are some musicians you need to see live to fully appreciate what it is they do. American guitarist Trace Bundy – on his way here for a national tour, see dates below -- is one of those.

He takes to the stage with just a couple of acoustic guitars but -- through the use of delay pedals to create loops of sound, unusual tunings and different capo settings – he can create a sonic palette full of texture, nuance, layers, emotions and musical colour.

You won't appreciate that on a CD necessarily (you'd have to constantly remind yourself that everything you hear comes from just one man) but by the reach of YouTube he has won a global following.
And you can see why -- 36 million views and rising -- when you check out the clips below.

“Yeah, I've been to 26 countries so far and this trip to Australia and New Zealand will take me to 28,” he says from his favourite coffee shop within walking distance of his home in Boulder, Colorado.

“I’ve been all over Asia where I have a lot of fans because of YouTube . . . and in places across Africa. Even when they can’t understand what I’m saying the music gets them over that.”

And he's genuinely excited about coming to New Zealand.

“Oh man,” he says enthusiastically, “I've been wanting to come for years and I'm hoping to get as much free time as I can so I can look around.”

And that's because Bundy had an interesting life before the guitar career took over, so when he gets to New Zealand he'll eyeball the Southern Alps and the high icy bits.

“Yeah. I got my undergrad degree in civil engineering but I didn’t really like it so I taught rock and ice climbing in Colorado for two years. 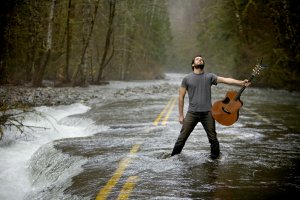 “It was great, I took people to place like a frozen waterfall and showed them how to climb. It was more like a guiding thing, but I just love the outdoors.

“Then the engineering department tracked me down. They’d seen my transcript and said it would be great if I could be convinced to come back.

“It was a full deal they offered me, they sent me to Africa to do some work, and then they asked me to teach for couple of years so I did that . . . but that was right when my music was starting to take off so I had to juggle this schedule of touring on the weekends and teaching durng the week.

“But after two years of that I went full time into music. That was 12 years ago and it hasn't stopped since.”

With his repertoire of originals and inventive covers of rock classics, Bundy admits the decision to go full time into music was actually made for him.

“I was pretty fortunate, I had so many offers to play and so many things opening up at that time that it wasn’t a huge leap of faith. I already had immediate work and so could be touring full time.”

With a young family however – a five-and-a-half and two-year old – he juggles the work and home life, so “two weeks is the longest I ever go out usually”.

“If it's in the States I fly out the morning of the show and fly right back home. It's a lot of flights and rental cars, but it is hard being away from the family. The trip to Australia and New Zealand will be the longest I've ever been away.”

Bundy is self-managed (“I had a manager, it's a long story”) and also self-taught on guitar. He says the former is sometimes hard (“maybe it's time to get some management again”) but the latter proved a real advantage . . . although he didn't know it at the time. By not knowing “the rules” he just explored the guitar for himself.

“I really didn’t know what I was doing and even things like the two-handed tapping that I do, I thought I’d discovered that, although certainly Michael Hedges and others had done it long before me. But that was kinda cool to find that for myself. 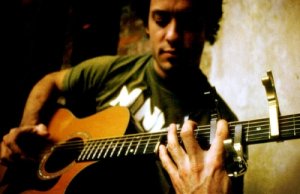 “The way I hold the guitar is not correct and I use my thumb a lot, but I was able to develop a few unique techniques because I just didn’t know any better.

“The other thing that helped was, I’m a horrible singer,” he laughs. “I thought that was my curse. I actually thought no instrumental musician could make a career without being able to sing as well.

“But looking back, being a bad singer meant I put all my effort into learning and playing guitar, and I really believe now that curse lead to my development . . . because otherwise I might just be a mediocre singer and mediocre guitar player.”

Bundy says he still practices almost every day but if he's been a longer tour when he gets back home with family the last thing on his mind is to play a guitar.

“That lasts for a day or two then I start to miss it and start practicing again. I’m on the road quite a bit so I'm playing all the time. But if something is your passion it is good to step back from it for a bit and you come back to it fresh and it excites your passion again.

“I’ve also been doing this for long enough to know that it's easy to get lazy and just do what you know works. If I find myself doing that I feel I'm losing the passion and I’m just doing a job. So it’s aways good to step back and maybe go on writing retreats where it’s just me and the guitar.”

At home he has a separate basement-cum-rehearsal room with all his guitars and pedals (“basically it’s an exact copy of what I take out on tour so I can quickly plug in try out what I’m going to play”) and he admits to having “about seven really good acoustic guitars but on tour I usually just take two”.

“That’s about as many as I can get on a plane. They are pretty expensive guitars and I take them on the plane, although people don’t really like that ,” he laughs, “because I get special boarding.”

Although he is an acoustic player it comes as surprise that among his listening for pleasure is . . .

“Oh, I love classic rock. Led Zeppelin and what Jimmy Page adds. I do love U2 and Pink Floyd, the Beatles were super-cutting edge on their later material.

“More recently though people in the indie-rock world, like the Decemberists. Any time an artists has an element from outside the box is what I enjoy.

“A lot of finger-style guitarists I know are really into heavy metal. People like Dream Theatre and old school Metallica. And Rodrigo and Gabriella are almost like Metallica on acoustic guitars.”
More surprising though is he admits to not being familiar with the great acoustic players like Bert Jansch (“I've heard some”), Davy Graham and John Martyn.

As a child of his generation — the technology-savvy players — he's aware of the trap that machinery can lead to.

“Whenever you get a new pedal you kinda go crazy with it and it does get a bit ridiculous, so I try not to do too much looping so that when I do I'm using it in a useful way where it is creating a rich tapestry of sounds and textures. And that's fun.

“I’m trying to remember who I first saw, maybe U2, who pioneered delay and the thick textures, that was probably my first experience of that. So I got this delay pedal in about '96 and you could tweak it to get 28 seconds of looping, so I messed around with that.”

Bundy however is more than just a gifted player who deploys technology to his advantage, he's seen enough effectively mute guitarists on stage who don't connect with an audience. So he reaches out. He's something of an entertainer as much as an artist. 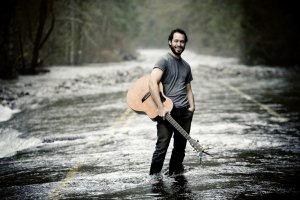 “I’ve heard people say they come half for my music and half for the banter and the interaction with the audience. I do a very dynamic and interactive show and if the audience isn’t reacting well to my humor or not recognising some of the jokes about the [cover] songs I’m playing, that’s almost harder than if they were not actually liking my music.

“I saw a guitarist whose music I really liked and he didn’t say a word other than “Thank you” every once in a while. I was actually so thankful for that concert because it inspired me almost more than any other concert . . . it made me think that I could have saved money and stayed at home with the album.

“It inspired me not to do that but to tell stories and be more interactive.

There’s a guitarist David Wilcox who I really love and after his concerts you feel you’ve just experienced a life-changing moment because he works the audience into the show with his stories and humor.

“Those two types of concerts are like night and day. And I know what I want my concerts to be.”

Note: all shows are all-ages concerts