Aside from being a composer and performer who crossed, or more correctly ignored, boundaries between musical genres – his catalogue includes everything from doo-wop to classical albums – Frank Zappa could deliver zinging one-liners.

At one point in the late 60s when he looked like a typical longhaired flower-child drop-out acid freak, he was once asked, “What are you, Frank?”.

His withering reply was, “I’m on duty”.

Like some lone centurion defending a citadel of sanity, Zappa was on guard against doped-out hippies and establishment politicians, laissez-faire capitalists and crusading Communists, drugs and booze . . .

Zappa, who seemed to work during very waking moment, was – like John Lydon – stridently opposed to anyone who didn’t think for themselves, those who bought into ideologies – whether it be “tune in, turn on and drop out” or Reaganomics. He railed against those would try to set constraints on what you could do in the world of art.

He was against censorship and for personal responsibility.

And Frank Zappa – like Ornette Coleman who didn’t see himself as a jazz musician – considered himself a composer. That meant if he wanted to compose a rock song, symphonic work, garageband opera, 50s doo-wop ballads or simply play spiralling out guitar improvisations then he would do exactly that.

Who could say he shouldn’t?

That perhaps explains why many find it hard to get a handle on his work. Even though he thought of it as all of a piece, it conforms to no particular genre, has politically acerbic songs alongside graphic ones about sex (or dental floss) and can be obliquely self-referential. For example Lather released three years after his death in late 93 was a triple CD set he'd originally conceived as four-record set. The material had previously been split over other albums in his lifetime and when it appeared as he intended, as his 56th official release

The sheer vastness of his output is formidable. In 25 years he released over 60 albums (some doubles, one triple, some live) and since his death there have been at least another 40.

So coming new to Frank Zappa means you have over 100 albums to stare down . . . and if you pick at random you're just as likely to get an album of whacky humour, or an all-instrumental set or a concept thing or chamber music or heavy rock . . . But if you are looking for a way in then the Zappa estate has an album for you: It's not his greatest hits because he had no hits, nor can it be a “best of” because – although there was one in 95 entitled Strictly Commercial – that would be down to taste.

It is simply ZAPPAtite: Frank Zappa's Tastiest Tracks and collects 18 of his best loved, possibly even most popular songs as a three-course meal opening with four appetisers. It's hard to think of a better introduction than his brilliant skewering of television on I'm The Slime which sounds even more relevant in these days of Fox News and The Real Housewives of Auckland. His hilarious poke at disco on Dancin' Fool was nominated for a Grammy.

Among the entrees are his absurdist instrumental Peaches En Regalia, his daughter Moon Unit on the hilarious spoof of LA teen culture on Valley Girl, and Don't Eat the Yellow Snow. And the desserts include Titties and Beer, G-Spot Tornado and Cocaine Decisions. The titles alone give a hint of their breadth, from spoken word through blues-rock guitar workouts and to the final track Strictly Genteel, his bizarre but heroic song played by the London Symphony Orchestra.

It may err too much to the salacious in the songs, but as your first course in the (mostly) rock end of Zappa -- although surprisingly it doesn't include his food-themed Muffin Man -- it is certainly going to tickle your taste buds. And some of your bad taste ones too.

It's 50 years since Frank Zappa announced himself with the Mothers of Invention and their groundbreaking double album Freak Out!

It and its follow-ups Absolutely Free and We're Only In It For the Money are essential in any collection.

But that's a massive smorgasbord.

For plenty more on Frank Zappa at Elsewhere start here 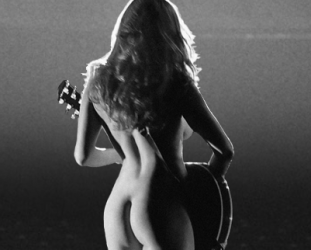 Before we get to jazz chanteuse Melody Gardot (a previous Elsewhere favourite, starting with her major label debut a cdecade ago), just a digression here about using sex to sell a product. And... > Read more