THE EAGLES: HOTEL CALIFORNIA, CONSIDERED (2017): The late check in Sometimes in life the important stuff goes past you. No need to apologise for not knowing things like how that Balkan conflict started. You kinda had to be there as it unfolded and keep up. If you started tuning in a bit late it was so complex you'd be forgiven for changing the channel.

When it comes to real serious stuff I'll confess.

I missed Pink Floyd's Animals and didn't own a copy of Dark Side of the Moon until about six years ago. In the latter case it hardly mattered because the damn thing was inescapable and everyone had a copy.

But in a more alarming confession of cultural inattention, I'd never heard the Eagles' classic Hotel California.

Not only never had a copy and, unlike the Floyd, never knew anyone who seemed intent on playing it at me.

Sure I'd heard the title track and now, when I look at the double CD 40th anniversary reissue (a '76 live concert on the second disc), I recognise Life in the Fast Lane and have a vague memory of hearing New Kid in Town, probably when builders were working nearby and had their radio tuned to one of those annoyingly repetitive and blathering Classic Hits stations.

As for the other six tracks? Not a damn clue.

Never been to an Eagles concert either and on my shelf I only have one of their albums. It's Desperado from '73 which I somehow acquired a couple of years back when I felt I should hear it. I have yet to put it on.

Maybe I will soon, but first I need to redeem myself and deal with The Big One.

In truth, Hotel California in '77 was actually easy to miss if, like me, you were taken by Springsteen's restless energy and historical overview of rock'n'soul, blindsided by Dylan's return to genius on the Blood on the Tracks which defied decoding, knocked out by Talking Head/Ramones/Voidoids etc out of NYC and of course desperate to grab anything of that new pub-rock/emerging punk out of the UK.

Not to mention what was going on at home with Hello Sailor, Saturday Night Fever (cleverly crafted BeeGees dance music plus black artists like the Trammps), Bob Marley and Culture and others out of Jamaica . . .

Yes, it was possible that Hotel California could just fly past you.

That said, Hotel California won more praise than Jesus and sold more than 35 million copies . . . but seems to be reviled by the hippest of critics, then and now. I often wonder if an album's success taints some people's perception but I've never minded if a record does well. It doesn't always mean it went for the lowest common denominator, just that perhaps it captured the mood of the moment and millions responded.

And not all small selling albums are genius overlooked, sometimes they just aren't that good.

So I come to Hotel California almost as neophyte to the Eagles . . . and certainly unsullied by any previous encounters.

The double CD reissue comes with the original album and that extra disc of a previously unreleased and precision-tooled live concert at the LA Forum two months before the HC release so it's a hits-until-then (Take It Easy, Take It to the Limit, One of Those Nights, Witchy Woman, Already Gone . . . all of which I “know”) with two HC songs added (New Kid, the title track). I'm not sure why so many people don't like the title track, it strikes me as an insightful image of paranoia-cum-decadence with one of those excellent dueling guitar parts that I loved when Thin Lizzy and the Allman Brothers did them.

The song Hotel California even now sounds like the jaded post-coke disillusionment with dissolute LA culture, but as Don Henley noted, “People tend to think the album is about California but I think it was about the dark underbelly of American culture at large”.

Probably true, and in the course of listening to this album I've been reading an Eagles' biography . . . and none of the original band were Californians.

Life in the Fast Lane has all the visceral thrill of tensile strength rock, all static and close to white noise in the ears at times. And it too is about coke and sex, something they knew a lot about.

My impression sometimes in this country is that people don't get the American ideology of The Road, the freedom of cars and open highways (yep, autos are bad, we get it, fossil fuels and such) which is emblematic of the American imperative of constant movement, emotional, political and literal.

Hotel California – even now – seems to encapsulate an especially lemon-bitter view of some of that . . . ameliorated by the freedom of drugs and sometimes genuine love.

To me, at this emotional distance, Hotel California sounds like an exceptional statement of being, as Tom Waits once said, “wasted and wounded”.

The Eagles at this time for them, by their heroically indulgent lifestyle and separate ambitions, had become hollow and divisive: “You can get on with your search baby, and I can get on with mine” on the over orchestrated and melodramatic Wasted Time, the very fact it is so over-the-top being the point I suspect.

And they follow that with a 90 second, orchestrated instrumental snippet of the same piece with descending strings, low cello and full-on Hollywood soundtrack . . . then Don Felder's slashing guitar opens Victim of Love. And yes, there's the encapsulating, self-pitying rich rock star title on the weakest song here. 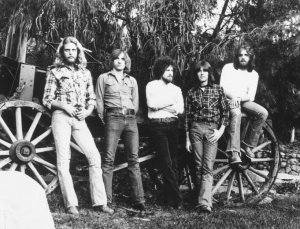 Love, drugs, excess, rock star privilege, unimaginable personal wealth, women prepared to get on their knees to worship at the altar of some cock-rocker here today-gone-already . . . .

It's awful, but in the context of its time when there are rare moments of coming down and the actual work of being a rock star needs to be taken care of . . . This was how you knock out stodge-rock to the approval of your similarly afflicted peers.

So why not Pretty Maids All in a Row afterwards written by Joe Walsh and Joe Vitale? It almost sound regretful, another godawful indulgence which comes off like bad McCartney/Wings.

But you always suspect that Joe – then and afterwards a very chemically damaged man – could connect with his heart and vision. Around the same time he wrote the hilarious Life's Been Good to Me So Far, one of he greatest slices of rock'n'roll self-awareness and delusion ever . . .

Some have said the soft-rock of New Kid in Town was about Springsteen whose success took them by surprise. Maybe.

So now I can say have heard the Eagles' defining moment Hotel California and it isn't half bad.

The first half of Hotel California is the goods, even at this distance, but in the second you have to wait until the final, slightly plodding ballad The Last Resort for another song of abiding interest. 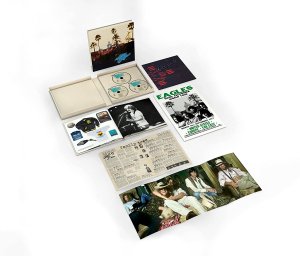 It is about their adopted home of LA, is unambiguous, speaks of great intellectual disappointment and the American Dream gone sour in the promised land of California, a place awash with greed and self-interest. These desperadoes aren't waitin' for a train but for the next release from the rewards and prices of boredom, ennui, and the dark heart of decadence.

The Gordon Gecko “greed is good” Eighties were just around the corner.

There's a triple disc DeLuxe edition of the Hotel California reissue with posters and a family tree (complex) but that seems a bit much for me. The double does just fine.

It isn't about me . . . but I suspect my neighbours might, for the first time, hear some thing I play and actually recognise it.

And Don Henley was the drummer?

I did not know that until this past week. 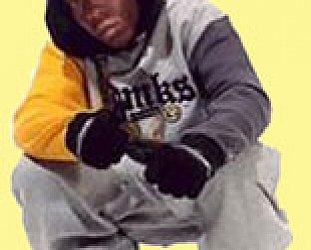 Dizzee Rascal (aka Dylan Mills), out of London's tough East End, crashed into view with his terrific Boy in Da Corner debut album last year. It made "best of the year" lists everywhere... > Read more 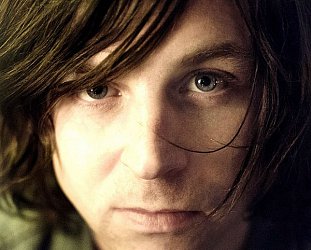 RYAN ADAMS CONSIDERED (2014): If you liked that here's many more

When Ryan Adams was forced to take a break from recording in 2009 after being diagnosed with an inner ear disorder even his most dedicated fans probably heaved a sigh of relief: the guy was just... > Read more