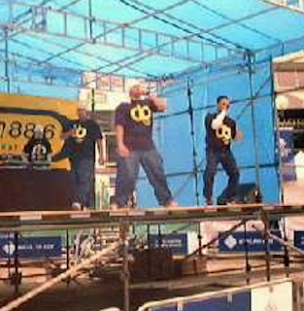 Taina Keelan pauses. It's been quite a time for headlining homicides, and maybe playing music in bars around Southeast Asia might not be that unappealing again. But, nah ...

"It's other things too, like the Governments are dictatorships, and we were told not be caught with a Muslim girl after 6pm. All the inequalities and so on."

At 26, Keelan - aka Tyna and half of Hamilton's hip-hop outfit Dubious Brothers - has seen a fair bit of the world from when he was in a kapa haka group which travelled to Seville for the World Expo in 92. He played guitar around Europe, then came back home and joined a band called Ascension, which scored a touring circuit in Southeast Asia.

"We played Jakarta, Beijing, Kuala Lumpur, Pinang, Surabaya ... We'd play covers but the audience would walk up with requests for local songs. So if you didn't know it you'd go to the music store and the guy dubs it off and next night you're playing that Chinese or Indonesian song. Then someone will request Whitesnake or Notorious BIG.

"So in a night we could go from the Titanic theme to Pokarekare Ana to some out-of-it Indonesia rap. That was six nights a week playing the Shangri-la Hotel circuit and the Hard Rock Cafes, a huge thing as far as the learning discipline as a musician and it was great money. That was my lifestyle.

"But I missed my family and my mum so I came back and joined covers bands here. I'd always loved hip-hop and felt like doing it again. So I did."

It was while he was producing a Native Sons album, the band in which he'd been a guitarist, that he met the other half of Dubious Brothers, beat-maker Chris Shaw - aka Chris Macro - who was then doing a three-year course at Polytech in "H-town".

Now a graduate in commercial music production, Macro grew up in Hamilton, moved to Wellington in his teens then went to Mexico for three months, around the States, spent time in Scotland and London, then came back to Hamilton. One night he walked into the studio with a box of beats for Native Sons and linked up with Tyna. 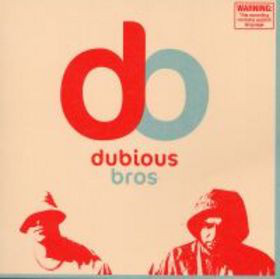 It is this conjunction of travel, talent and musical experience that separates Dubious Brothers from other hip-hop crews. Their impressive debut album, Trade Secrets, has addictive beats and intelligent lyrics. And because Dubious Brothers often tell stories, their songs, full of deceptively simple and nagging samples, grip from the get-go.

Take The Accident, which adopts four perspectives on a car crash. Or Johnny and Jenny - with guest rapper Marcus of Native Sons - which is Once Were Warriors with a gorgeous chorus counterpointing the tragic story until its redemptive ending. Or Lisa, a moral tale about a hip-hop groupie.

Macro - who studied jazz theory and does freelance mastering at Kog and production at MaiFM - works the beats, Tyna plays bass, guitar and does vocals. Their musical backgrounds mean they draw on a deeper well of ideas than many others.

"We're both 26, a little older than lots of cats who just drop stuff," says Tyna. "Our influences go back to Marvin Gaye and the Motown era."

They call their narrative style "pulp hip-hop" acknowledging Pulp Fiction and the filmic quality of songs like The Accident.

"We were at my mate's house and I was watching something on the news - a cop chase and a drug runner," says Tyna. "I said we should go into different rooms and write a sequence each.

"I picked the drug runner, another picked to be the burglar and so on. And Mareko [of Deceptionz] took the innocent bystander, which is the hardest point to write from. But right at the end he comes up with, 'Then I came face to face with myself' and we thought, 'You're the man!' I don't know where a song like that fits. I'm sure it's got its place though."

Macro: "The beat was thrown together in half an hour and there was no bassline. We added that the next day and tidied it up. The story is so refined and the beat really fits the mood. It's too long for a single, about seven minutes, although it doesn't feel like that because it's telling a story."

At a time when local rap is adopting a harder edge, Dubious Brothers speak respectfully of women.

"I can see that in the States it's different, but here there's no need to be calling women 'bitches'," says Macro. "I was raised by my mum so I respect women too much."

Tyna: "My mum would drive up from Palmy and smack me in the head."

The Brothers also bring in guest rappers for straight-out battles, and two months ago their mixing skills were recognised by TuPac's crew Outlawz, whose Worldwide they remixed. Macro got the tracks on a Monday and pulled together a radio-friendly mix that night which was sent back to the States for approval. Within four days they cut the final remix.

"That was such good press," says Macro. "And TuPac is on the track. Man!"

It's been quite a year since Macro and Tyna first met at the Native Sons' session. They have worked with Ill Semantic, Four Corners and others, had three tracks on MaiFM, and their album comes out on the station's new Mai Music label - which, while an advantage to be on the top-rating station, may prevent the tracks from moving much further than Mai's playlist and audience.

"I don't think people will be prejudiced because we've signed to Mai," says Macro, "and songs like The Makers and Rage with DJ Sir-Vere would fit into other formats. Channel Z has been interested in The Future," he says, referring to the narrative about a future in which hip-hop is banned.

Tyna: "It was funny Mai was interested in The Future as a single, because we thought it was an album track with hard-out strings. But that kind of foresight is probably why they are the No 1 station. They could pick it.

"I remember reading that some high-profile people in the music business were dissing Mai because they've got a label. "They were saying it was incestuous, having acts that they were pushing. And I thought, 'Man, that's the cleverest thing I've ever seen'. I think we may have a shot at play on other stations because some of our stuff is a bit more musical."

Macro: "People say to me, 'You guys are just being played because you're signed to Mai', and no doubt - that was part of the reason we signed. But they understand the music and we know radio play isn't a right, it's a privilege. So if we can assist ourselves by signing with them that's good."

It would be unfortunate if Trade Secrets didn't cross out of the MaiFM audience - it is hip-hop without the self-aggrandisement and vacuous bragging, has memorable songs and, despite their thumping live appearance at last weekend's True Colours festival, the album works on a much quieter musical level. In many ways it barely fits into the spectrum of local hip-hop, and is the better for it.

Looking at the number of guests on the album, Macro notes that hip-hop is full of factionalism and territorialism. Their intention was to expose new talent without the posturing.

"Our vision was to make dope-as beats and then get people in, especially unknown cats that are really good, like JB and Marcus," says Tyna. "There's that thing where people establish themselves and fear if they let too many others into the circuit they'll be knocked off their perch. We're not down with that. The more people doing it, the better it is for hip-hop.

"And I think we'll reach the people who think they might not like hip-hop but will say, 'That's clever'. We're not purists, you can hear it in the music. We just want to make good music."

"And hip-hop," says Macro, "just happens to be the medium to do it."