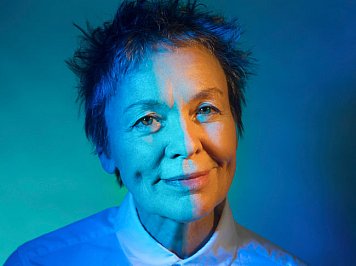 The irony isn't lost on us: Laurie Anderson, the American multi-media artist on the leading edge of innovative technology, can't get cellphone coverage.

Admittedly she's on a construction site but all we have are bursts of static between yawning silences, with which she could doubtless do something provocatively creative.

We postpone until she's back in her Brooklyn studio.

“This is downtime,” says the perpetually busy 72-year old the next day. “I'm, painting big and pretty bad paintings, but I don't worry if they're bad. It's just pure experimenting and really nice to do.”

However even downtime is productive (she'll probably exhibit the ones that aren't horrible in the spring, she says) and the following day she's giving a Sunday afternoon talk at the Brooklyn Public Library entitled The Size of the Con, a monologue-cum-discussion about preparing for the 2020 election.

“It's called that because the writer George Trow talked about the U.S. being based on the idea that everything could be so big: the bridges, skyscrapers, the population . . .

“Then the question was, 'What else is big?' Well, there's the marketplace, and the ultimate question to consider is 'the size of the con'. I thought that was a good way to put it, people feel that.”

And Anderson – a guest artist/curator alongside director/choreographer Lemi Ponifasio and actor/composer Bret McKenzie for next year's New Zealand Festival of the Arts in Wellington – embarks on a digressive consideration of the American socio-political landscape and where artists fit in. Or fail to do so.

She speaks of widespread cynicism and people confronted by the constant white noise where “the media is entertainment”, each day delivering new drama.

“I never thought I'd see anything like this, ever. I'm trying to find new ways of expression rather than just saying, 'Can you believe what he just said?' because that's getting boring.”

She admits she struggles with how artists should respond in such times, and notes some don't feel they have more obligation to talk about it than any other citizen, “except we do have tools to talk about it”.

But many are tired (“there's a lot of depression”) and, despite her measured responses and penetratingly philosophical rather than directly political work, she says “I'm not trying to pretend I'm reasonable and they're insane because that's the game, you make the other side into some weird cartoon”.

“They're not cartoons and neither are we. We have more in common than we might think.”

A conceptual artist, musician and monologuist, Laurie Anderson sprung to international attention beyond the American art world with her innovative, minimalist and beguiling performance piece O Superman in the early 80s. Marrying electronics and her cool delivery with an arrestingly spare video, it went to number 2 on the British singles charts and nearly cracked the top 20 in this country.

She came here at the time “masquerading as a pop star” but wasn't smitten by that world because “there was no danger I was going to do more of that,” she laughs.

“I was kind of happy about that [attention] but didn't really believe it. I approached it like an anthropologist. I did get a little seduced, but for the most part was able to get through it.

“I have great sympathy for those who have to do that because that's not easy at all.”

Her creative world had already been very different from the culture of pop and subsequently she presented installations and multi-media programmes, invented characters as mouthpieces, decoded language with astute wry wit, worked with a roll-call of American's avant-garde, was much feted and frequently rewarded as a charming agent provocateur.

This year her album Landfall with the Kronos Quartet – based on her experiences during and after Hurricane Sandy in 2012 – won the Grammy for Best Chamber Music/Small Ensemble Performance.

It is music and reflection on loss, something very familiar recently. Lou Reed – her husband of five years whom she'd met in 92 – died in October 2013.

A couple of times a year they have parties for him and at the most recent played many of his favourite soul songs.

“I made a really cool playlist and it was haunting what serious grooves [the soul songs] had, and how much we've given up by using technology in music. Algorithms just don't swing.

“Not that I don't like slick pop, I do sometimes. But we've given up serious grooves and come up with fake ones which are so overcomplicated. And 19 people working on the song!”

However this is the woman who in 2003 was the first artist-in-residence at NASA and embraces high-end technology, as in her award-winning To the Moon work at next year's festival, a collaboration with multi-media designer Hsin-Chien Huang.

This 20 minute immersive, virtual reality piece combines film and music with visual art: “It's addictive because it's 'real' fantasy”.

Technology has been a thread throughout her work and that NASA experience reminded her of the human capacity for awe, something many have lost in the current barrage of information.

What she took from her time with NASA scientists was “just how little we know” and while it sounds mundane to observe the obvious, “it's extremely hard getting to Mars and I was watching scientists trying to figure that out when it is almost impossible”.

But there's also ambivalence: “If we do manage that then we're going to be terra-forming Mars. Like, we know so much about taking care of a planet and we're now going to take care of Mars? Really?” she says with an infectiously engaging chuckle.

At the other end of her spectrum for the Festival of the Arts – which includes a conversation session about close listening, the Lou Reed Drones installation with his guitar technician Stuart Hurwood playing along with feedback loops, and the Anderson-Reed installation of sound, songs and visuals Here Comes the Ocean with her string ensemble, Hurwood and New Zealand taonga puoro player Horomona Horo – is her popular Concert for Dogs.

Dogs – on a leash “and which play well with others” – are invited to a 20 minute outdoor concert where she performs, sometimes using frequencies beyond human hearing. She first performed it at the Vivid Festival in Sydney in 2010 when she and Reed were guest curators and “was hoping it was something other people would pick up”.

“There's a future for interspecies music. Can you imagine what it would be like if we could communicate with another species? Like with mosquitos we'd be, 'Oh they're really cute' instead of killing them.

“I've done it a few times and it's always incredibly satisfying. I don't know why I just don't give up playing for humans completely!”

There is also The Calling with her string ensemble, Horo and others which has taken on a personal connection with this country.

Three years ago her niece Thea was killed by a car while working in Hawke's Bay: “She was teaching dance to people who can't dance. She was that kind of angel”.

Anderson's brother came to take his daughter's body back to San Francisco and was struck by the kindness here. Since then Anderson has felt New Zealand a special faraway place. The festival invitation was “an additional motivation to come and make something for [Thea]”, she says gently.

In conversation and her art practice, Laurie Anderson offers quiet and consideration in a world of haste and noise through her finely wrought but panoramic story maps. Her softly modulating voice is clear and often soothing, and her tone serious but not earnest.

Despite questions at the interfaces of art and commentary, poetics and philosophy, being provocative?

“Yes, to say I'm quiet and calm so people can focus on the words is totally fair.

“I'm not an actress, I don't have those emoting skills which would get in the way of the text, so it's good not to do that.”

But for all the control she exerts over the work, there's still space for challenging improvisation which Reed opened her up to.

“I'm beginning to trust it more. It used to feel incredibly risky, but it can be thrilling. Like building a big ship in the air which you can move around.”

There are reviews of Laurie Anderson at Elsewhere starting here. 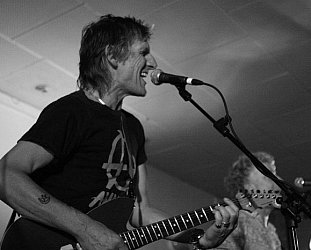 So where do we start with Dave McArtney? Well, with Hello Sailor of course which he co-founded in the Seventies, help take to great heights and some darks depths, wrote wonderful songs for and so... > Read more