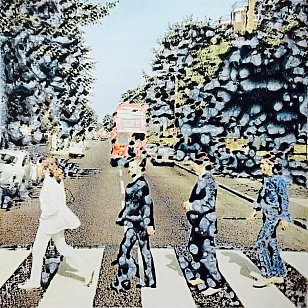 Rather than write about this image for the Art by Elsewhere pages, it was suggested by Dr. Celia Haughty-Smart, senior curator of the Work And New Knowledge gallery in Lower Hutt that she scrutinize it from a more critical perspective. This is what she wrote.

In the canon of distorted hyper-reality and de-accentuated cognitive imagery as discussed by Jacques Degradeur, works such as Graham Reid's AbbEyrOad touch on the disassociation of tropes and rely on disruption of the familiar.

By manipulating the image of four unknown figures crossing a road – the mundanity of the act reenforcing that these are simply ordinary people engaged in ordinary behaviour -- he subverts expectation in a way that recontextualises locus yet respects the dialogue between artist, viewer and subject.

That the work is also entitled AbbEyrOad which identifies the vowels A, E and O he reflects on, and draws attention to, the absence of “I” and “U” (you) which again, in a retrograde, permeative act of psychological transference, reminds us of the porous nature of subjectivity and objectivity where neither – or indeed both – either exist or coexist. No I or You.

The planar aspects where the dappling of foreground and background are given equal visual – and therefore hyper-visual – weight permits the original image to be dissolved, in a very literal way, into a metaphysical metamorphosis of ocular representation and the liminal dynamic of the frozen movement of these unknown individuals who vainly appear to be projecting identity through their different clothing.

That Reid negates identity through the enigmatic transitional and assertive palette deployed discreetly alludes to the abstract work of New York's Magdalena De Stand-Stijl and the quasi-farcical photography of the German Gerhardt Blank.

AbbEyrOad -- an indecipherable word which maybe a neologism or disruptive acronym -- is a seminal work in Reid's canon.

It is a challenging, deconstructive piece where the boundary between perception and precision, possibility and post-modern revisionism (as discussed in Bridget Darragh's profound work Meaning and Clinical in the 22ndCentury: a Fragadilinal Approach to Analysis) no longer exists but invites the question: “Who are the anonymous individuals in this image?

“An interrogation for which we have no answer.” 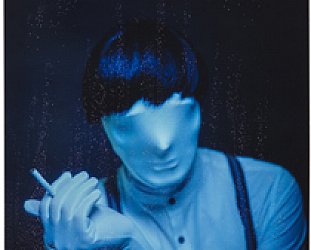