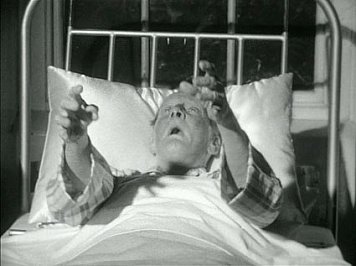 Just when the genre of reality television seemed to have run its course, the doyen of the style, Christie Julian, has, for want of a better phrase, given it a new lease on life with Deathbed Confessions, a series she describes as "a great leap forward which places emphasis on the 'reality' part of the equation".

Speaking on her departure for the United States, where she is offering the concept to NBC, ABC and funeral homes in Miami, Julian said the reality genre had become tired, predictable and lacking in risk.

"While some of the stunts and challenges have become more dangerous, as on programmes like Jackass, at no time does the audience believe that anyone will actually die. And if they did -- as we have tried to make happen a number of times, especially with some of those models and that tele-blond -- the viewer knows we would never be allowed to show it."

In Deathbed Confessions, however, there is a guaranteed outcome every time.

This really is life and death stuff.

Well, mostly death, actually. And television is nothing if not about that reality. Or should I say reality is about death, if not nothing else.

The premise of the new "groundbreaking" series, as Julian calls it -- and she is exploring a sequel aspect with the pilot of Burial Plots -- is ordinary people on their deathbed making final statements to loved ones, and sometimes family members.

Because their end is inevitable, all participants sign a release guaranteeing to die while the cameras roll.

Should a participant recover then Julian’s TakeDown Productions can sue or suffocate as it sees fit.

The drama comes in what the "clients" say in their final moments. Outbreaks of profanity and flatulence notwithstanding, most participants offer revelations of unfaithfulness, bankruptcy, or having a separate family or lover in another city.

In one hilarious sequence in an early episode, there is a revelation of incest which comes as a surprise to the gathered family.

The punchline is that the father dies just before he reveals which daughter or son it was with.

"Yes, there are some uncomfortable moments," says Julian. "But in that instance, because it was such a very human moment, we wanted to keep it in. And, unusually for television, especially reality television, we decided to keep filming their frozen and shocked expressions for the next three minutes in absolute silence.

"No dramatic music on the soundtrack, just that very real emotion of the wife weeping uncontrollably.

"Then the screaming, of course."

The show isn't without its gentle humour either.

He has left all his business interests and homes to his three children (all lawyers) and Cantake is to get only a small flat and a fixed weekly income of $250. As the realisation hits her, you could swear there is a flicker of a smile on Hancock's thin lips.

Other highlights in the series include a man telling his son that he is not his biological father and that the woman the boy calls his mother is "nothing more than a slut, whore and cold-hearted bitch"; and an elderly woman who tells her two daughters "you can take it with you" and that she has had her savings turned into cash and then burned so the ashes will be in the coffin with her.

There is also the six year-old child with leukaemia being told she will soon be an angel. Or she'll go to hell if she doesn't admit it was her who hid the house-keys that day last November.

Deathbed Confessions has raised the ire of groups who speak of "death with dignity", but Julian dismisses the criticism.

"There is no indignity to the dead being offered here. That's an entirely separate programme which is still in the early production stages.

“No, what we are doing is allowing people to see the only inevitable thing in life, and then we exploit that for base gratification, ratings and money. If people have a problem with that then that's their problem.

"We see it as an important, sensitive and intelligent look at dying -- and the personal tragedy of it for all those concerned like family, friends, doctors, camera crew, our sound people who worked very long hours, and of course the excellent scriptwriters and researchers."

The final episode, however, sees tragedy turning to farce. As people gather around the bedside of Hunter Datsun, on life-support after a motorcycle accident, the surgeon advises it is time to turn the machine off on the 19-year-old vegetable.

The camera operator, thinking the doctor is talking to him, stops filming. But when Datsun's family of eight brothers and sisters, various step-parents, and guys from the panelbeaters where he worked realise the camera has stopped there is outrage.

As the screen remains blank, we hear various family members abusing the film crew for denying them the opportunity of having their most private moment recorded for the public.

The final voice before the credits is Datsun's distraught mother yelling, "We didn't open our hearts and family and suffering to you for nothing, you know. Now turn that bloody camera on, keep filming - and give us our $300."

This obvious satire appeared in the New Zeaand Herald in 2005. Some people rang to express their outrage at such a programme.