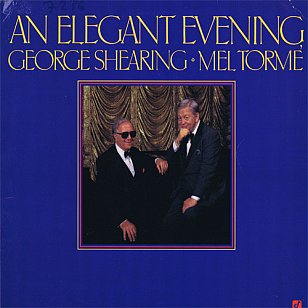 In 1988 pianist George Shearing and singer Mel Torme appeared at the New Zealand International Festival of the Arts in Wellington.

As a journalist I was there to cover it and scored interviews with everyone from David Harrington of the Kronos Quartet and Wynton Marsalis (the former I went on the town with, the latter I guided around the Michael Fowler Centre where he was to play) to Maxim Shostakovich with Mstilav Rostropovich and the garrulous George Melly (who stopped drinking when I stopped paying).

I had a great time, filed lots of interviews and reviews, and saw some great artists.

And there was also Shearing and Torme who didn't interest me much, jazz ballads delivered smooth was just a little beneath me.

So I went to their concert with some lack of interest (curiously mostly about Shearing) but came away utterly smitten . . . by Torme's nuance and warmth.

They didn't call him the Velvet Fog for nothing.

In his autobiography It Wasn't All Velvet published that same year he wrote about his recent pairings with Shearing (“quicksilver and mercurial, with the most delicate pianistic touch on this planet . . . one of my best friends”) but noted their first two albums on the Concord Jazz label – An Evening With and Top Drawer – won him awards while Shearing was overlooked.

This album in hand, An Elegant Evening, pulled from the shelves at random, was their fourth together but the first without a rhythm section (actually just bassist Don Thompson on two of the previous outings).

Because this is mostly subdued – there's a sprightly Moon Medley and a jaunty You're Driving Me Crazy at the end – that means you have to lean into the slow or mid-tempo moods of the ballads.

Shearing delivers an enormously rumbling intro on After the Waltz is Over (co-written by Torme and Bob Wells) but thereafter Torme brings that velvet tone to the lyrics as Shearing delivers something more dramatic beneath.

It's an odd but interesting one.

There is also an unusual, echoed take on the traditional English folk ballad Brigg Fair which sounds like it is starting in an empty cathedral.

There is gentle swing here (This Time the Dream's on Me) and a Dream Medley (I Had the Craziest Dream with Darn That Dream) but it is an uneven album where the best is in the slow ballads (a lovely Last Night When We Were Young, You Changed My Life written by Shearing).

Oh, and liner notes by the film critic Leonard Maltin.

Around this time Torme said in the past decade his voice had become – as with Crosby and Sinatra when they were older – deeper and with more range at each end, high and low.

That is certainly evident on the best songs here. That Dream Medley stretches them but they make it sound effortless.

This is a nice album – Concorde Jazz was quite good at producing “nice” albums – but not one to start the Shearing/Torme journey with.

Mel Torme could be a peerless singer although in an interview with the New York Post the following year he simply said, “I do my best”.

Elsewhere occasionally revisits albums -- classics sometimes, but more often oddities or overlooked albums, some by major artists -- and you can find a number of them starting here.

Well Graham you have made my day with this album The first track "I'll be seeing you," is probably one of my favourite songs, I have collected as many versions of this song as I can and thank you ...I haven't got this one .
so I can add it to my list
Iggy Pop and Francoise Hardie's version is amazing and Johnny Mathis. The list goes on and on
So once again thank you