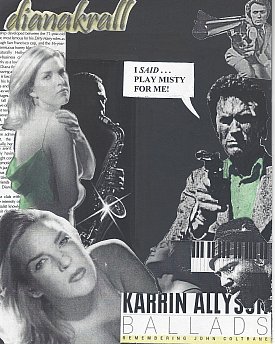 This collage was done for Real Groove, a magazine whose audience was predominantly into rock, pop, hip-hop and Americana etc.

I had a jazz column and that is always a hard sell, so I tried to make art which caught people's attention.

I seem to recall I was writing about these two artists who had released albums of jazz ballads . . . but maybe neither had done Misty?

That would explain Clint Eastwood because his 1971 thriller was Play Misty For Me.

But frankly he was just there to make readers stop and look at the page, and as I recall I started with a joke about Karrin Allyson coming from a long line of poor spellers just to hook people into an article which was going to be rather serious.

There are articles at Elsewhere about Diana Krall (album reviews and an interview) starting here. 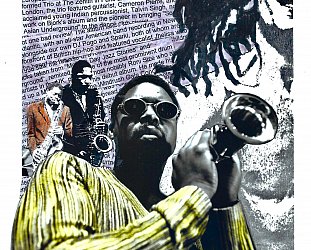 As mentioned previously, some of the collages appearing here were for the magazine Real Groove which was mostly read by people into pop, rock, hip-hop and alt.country etc. I wrote about jazz... > Read more