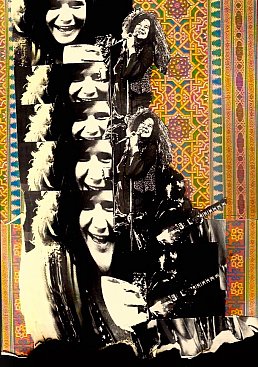 I can't remember why this was created, or where or who used it, but I wrote a major piece about the great Janis Joplin, noting that of all the dead rock star legends of the Sixties she has been the least revived and repackaged and revered.

She just seemed too unmanageable, too assertive and probably even too rock'n'roll for current tastes.

I also noted that she would scare the beejeziz out of all those sensitive young women singers (whom I have sometimes rather cruelly called "sleeve suckers").

Janis' story was as tragic as it was heroic, and it seems to me that she has been slowly written out of rock culture other than as brief skyrocket who was unique and therefore attracted few to follow in her wake.

I wanted an image which conveyed the energy and humor of the woman and no single image could do that, hence the slurry multiples.

You can read my Janis Joplin piece here.