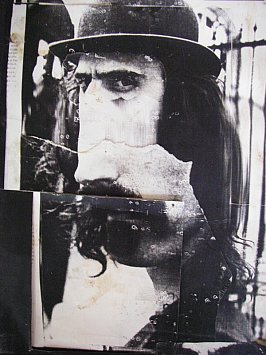 I have done a few collages of Frank Zappa (one of Frank as the Mona Lisa) because his distinctive appearance lent itself to a kind of cut-up and refracted image . . . which I felt also reflected his very diverse music.

As with the albums where you listen to one and think you've figured him out then another one is so different it changes your persective, I hoped this kind of image would have the same effect.

You look in one place and can see him, but only a part, and then in another place it has a different angle or something and you register a different part again.

The image was also deliberately distressed because this was Zappa from what was a very different time (Sixties) and that was long ago.

There is a considerable amount of Frank Zappa at Elsewhere starting here.