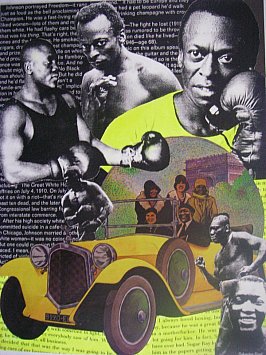 Given his interest in what we once called "the fight game", it was inevitable that Miles Davis would be drawn to the outsized character of boxer Jack Johnson who caroused, openly went out (and home) with white women, enjoyed life living it large . . . and took out contenders and pretenders along the way.

The collage positions images of Davis and Johnson around one version of the album cover (the stylised Johnson and women in car) as well as text about Johnson, some of it from Miles' autobiography.

It was to accompany this article about the box set of A Tribute to Jack Johnson which was Davis and his fellow players pulling together jazz, funk, rock and more in the studio in 1970.