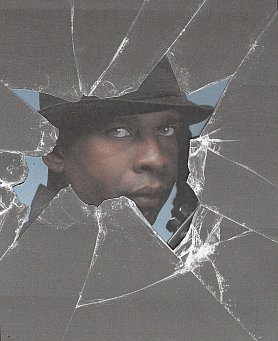 This collage was very simple but oddly enough it took quite a long time to execute properly.

It is of Vernon Reid from the band Living Colour and it accompanied a 2017 interview with him, the second time I had spoken with him (the first being back in 1993).

He was articulate and sometimes quite righteousy fiery, as he had every right to be.

As a black rock band Living Colour had been accepted but as he noted, rock critics and the public seemed to think, well we've got one back rock band, do we need another?

And as a black man in Donald Trump's broken America he had much to say about that too.

The idea of him being seen through a broken window (although I deliberately allowed for him to seem to come through it, top right) was that he was either outside looking in, or inside looking out.

In his conversation he occupied both positions.