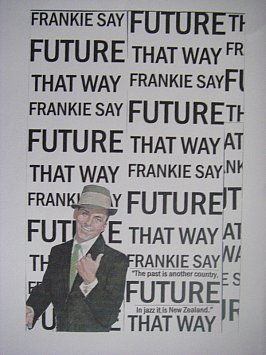 There was a time when it seemed every jazz album by a New Zealand singer was just more of the same old standards . . . and as I often said to some of them, if you do something by Sinatra you're inviting a comparison you just can't win.

But still they came.

I can't remember exactly what prompted this collage but I think it accompanied a few local jazz albums . . . mostly of standards.

I remember thinking that perhaps "Frankie say" would go past the jazz artists so I just drilled it home by adapting the famous line from The Go-Between. I didn't want to say the past was a foreign country (as LP Hartley wrote) but rather that it was a different country.

And oddly enough in jazz it was New Zealand where the artists seemed to live . . .  in a time before their time.

It made sense therefore to have an image of Sinatra pointing backwards . . . to the "future". 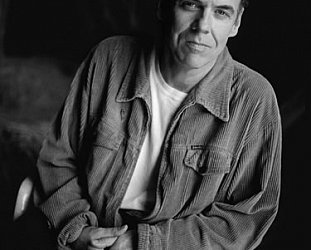 Thursday last week and a cool, almost chill night in Los Angeles. It’s a little after nine and John Hiatt is back in his hotel room after dinner. He came in from Nashville a few days ago to... > Read more