Because they only recorded this debut and the rather indifferent Adventure the following year before breaking up, you might expect this New York four-piece to not really have made a mark in the manner of their long-running peers the Ramones, Talking Heads and Blondie.

But this debut album was so exceptional -- and so different from the prevailing mood of the late Seventies -- that it has regularly been hailed as one of the greatest rock albums of all time, even though it failed to crack the US top 150 and peaked in the UK at 33.

With the double guitar threat of Tom Verlaine and Richard Lloyd (who alternated with hand-in-glove soloing and rhythmic work), the spare and locked-down bass of Fred Smith and drums of Billy Ficca, and a primitive but evocatively spare production, Marquee Moon stood worlds apart from the joyless punk coming out of the UK or the slightly arch Talking Heads.

In an unflattering cover (a band shot by Robert Mapplethorpe which has been photocopied), Marquee Moon might have been expected to pass most people by if it hadn't found favour with influential critics (notably Nick Kent in the NME) who heard in it not just the astute and memorable guitar work (and this in a time when punks in the UK were eschewing not just solos but anything approaching technique) but also cool wit as much as sneering rage. 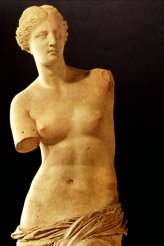 When Verlaine sings about falling into the arms of Venus de Milo (left) you just had to laugh knowingly.

Described as epic but never overblown, Marquee Moon was full of musical ideas and poetic lyrics, with guitar parts recalling the psychedelic days of Quicksilver Messenger Service and Love of a decade previous, but which inhabited an entirely different and bleakly urban landscape.

The 10 minute title track fades beautifully on the original vinyl -- as if the song went on forever -- but CD reissue allows it to come to an end a minute later. Not sure if that is right, there was something sublime and mysterious in that slow fade.

No matter, there is a CD reissue of this classic debut which could easily be in the Essential Elsewhere pages: it is remastered, in a tasty gatefold sleeve with lyrics and an essay, notes identifying who takes the solos, as well as alternate versions of three tracks (Marquee Moon included), their pre-album single Little Johnny Jewel and an instrumental.  It's a gem -- and is now in JB H-Fi stores here for the astonishingly low price of $9.99.

Verlaine and Lloyd -- the former into a creditable solo career, the latter a bit drug addled for a while then crawling back -- never made music as potent, compelling, mercurial, wry, eloquent or as excitingly innovative again.

But that they once did, for that brief shining moment in a New York studio in late '75, is more than enough.

A classic on the cheap.

Didn't Television record a third, self-titled, album in the 90s? GRAHAM REPLIES: Indeed they did, about 91-92 as I recall. I stand corrected. But to be honest, I forgot about it because I never play it and I doubt many do. Verlaine's solo albums after Television however . . . Wonder if they'll do something at their show like Souvenir from a Dream or the stunning Kingdom Come from from his first solo album. I doubt it. But maybe something from that dull "third album" because they have to?

Really looking forward to Thursday night, this lp and Horses encapsulate the best of the 'non punk' punk era.

Making the pilgrimage from around NZ and fiji with my boys. Stoked to see one of my favourites after all this time. This is one of the great, if not greatest non blues based guitar albums very pleased when i unpacked my 35 year old vinyl after 5 years storage and it was perfect! The third album is more like an additional verlaine album and that is never a bad thing. My favourite solo would be flashlight. 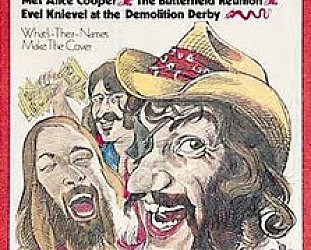