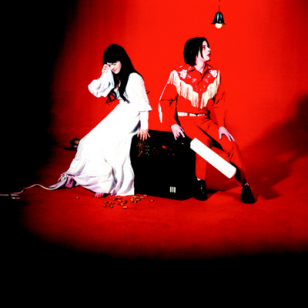 For many people Elephant from '03 was the White Stripes' "break-out" album, the one which took them well out of cult status and into their living room.

With material as strong as Seven Nation Army, There Is No Home For You Here, Ball and Biscuit and the killer cover of Dusty Springfield/Bacharach-David's I Just Don't Know What To Do With Myself, suddenly Jack and Meg White were part-indie/part-mainstream and very, very interesting -- not the least for this being recorded in Britain and have a curiously "English" element to it.

The mystique of their relationship only enhanced their cachet -- by now most knew that Meg and Jack were ex-spouses and not siblings as they had insisted, and still seem to -- and Elephant went top 10 in most countries that mattered, their first album to seriously chart internationally.

So why should it turn up here now?

Because at a mere $14.99 at JB Hi-Fi stores here it is our Bargain Buy this week -- and also because I have just posted here an interview with Jack (and lesserly so a sleepy Meg) about this very album. Check it out.

Of course Mad magazine -- which had been skewering popular culture since its inception in the early Fifties -- would take an interest in the Beatles. Their hairstyles and distinctive appearance... > Read more Recently at Elsewhere we offered a kind of "how to buy Elton" column and, given the four albums we chose, concluded the shorthand might be, if longtime lyricist Bernie Taupin is on... > Read more