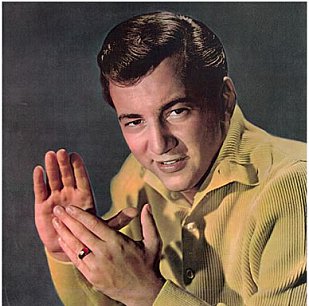 Numerous performers have changed their style or direction in their career. In the rock era we would immediately tick off Bob Dylan, David Bowie, Madonna, Bruce Springsteen . . .

But for some who have a particular image -- especialy those who came through in the Fifties -- to change meant to lose an audience. Rickie Nelson struggled to escape his youthful, clean frat-boy image when he reinvented himself as a country artist Rick Nelson.

But Bobby Darin was always one of the least easy to pigeonhole: in some circles he may be known for the inane pop song Splish Splash or the rather beautiful Dream Lover, to others he's th guy who did that finger-snap nightclub treatment of mack the Knife and the gorgeous Beyond the Sea.

Later he went in a more progressive folk direction and the man who had been married to Sandra Dee and sang in tuxedo-filled clubs was now Bob Darin with a moustache, singing If I Were a Carpenter, working on Robert Kennedy's election campaign (he was with him the night he was shot) and later recording for Motown.

About five years ago Kevin Spacey made the Darin bio-pic Beyond the Sea and although it received mixed reviews it perhaps got his story to a wider audience which had no reason to know anything of Darin (born Walden Cassotto) who died in '73 at age 37.

This five CD set picks up Darin in his early days (the start of the Sixties) and shows what a diverse talent he was.

The first of the five is Darin at the Copa and is a typically slick nightclub set with an orchestra and quick quips between Some of the These Days, Mack the Knife, Dream Lover and I Got A Woman (he was a lifelong Ray Chalres fan).

But the next album is For Teenagers Only (even then he had to make the distinction for his broad-based following) and is more along the pop/doo-wop/light rock'n'roll axis with songs like I Ain't Sharin' Sharon and Pity Miss Kitty. Twelve songs in 25 minutes, very dated.

But Two of a Kind, co-credited to Darin and Johnny Mercer finds them back in clubland (with Billy May and his orchestra) on updated and finger-poppin' standards, scat singing and that customary in-song banter ("Oh yeah, tell 'em Bobby"). Again it is dated, but in a very different way and you can see why his following would be bewildered.

On the cover of Love Swings he poses wearing a sea captain's cap and smoking a pipe, the kind of mature, sophisticated look common in Playboy at the time. Despite that, it is a fine album where he pitches himself in that jazzy, big band territory and you can hear why Sammy Davis Jnr and Frank Sinatra not only rated him, but counted him a peer.

And then there is Twist with Bobby Darin where he is back in teen-territory again with lightweight rock'n'roll and pop-chart rhythm and blues, most of whiuch he wrote which just shows how he adopt a genre. And his slightly risque Multiplication is here too - alongside the hoary old You Must Have Been a Beautiful Baby given a contemporary spin.

So there are five albums by Bobby Darin, all recorded in a little over 18 months: from live at the cocktail-friendly Copacabana to the ducktail dancefloor at the hop.

n these years, Bobby Darin recorded too much and too diversely for his own good, but that ws the way he was. Admirably, he wouldn't be bound by any particular style and could sing convincingly in many.

So although a little different, when you can pick up five albums for $20 at JB Hi-FI stores here, that makes this set our Bargain Buy.