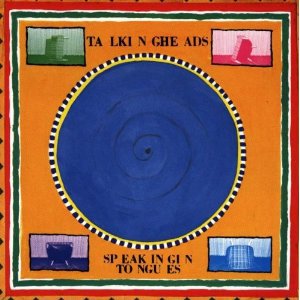 Prior to this jerky and funky album in 1983, Talking Heads had been critically acclaimed for more than five years on the back of albums which were considered taut, arty, intellectual and even a bit academic.

But with the single Burning Down the House (and the video), the poppy Girlfriend is Better and delightful This Must Be The Place, the album had an immediate impact, and legs. Even the jazz magazine Down Beat got it: "All nine of the record's songs shimmer with thought-out funk charm and the band's studio sound enhancements at no time compromise their natural vivacity."

Critic Adam Sweeting in Britain said it succinctly: "Like all good games, this one gets better the more you play it".

With their core sound augmented by genuine funk players (Bernie Worrell, Nona Hendryx, Wally Badarou), odd guitar and synth sounds, and a bunch of songs which stuck like gum, Speaking in Tongues made itself perfectly clear.

One of the great albums of the Eighties which bridges art-rock and funk, it is deserving a place in any serious collection . . . and at just $10 at JB Hi-Fi stores here, that makes this Talking Heads album this week's Bargain Buy.

And you might be surprised by how many contemporary bands you can hear in these grooves.

It gets even better when you check out the film "Stop Making Sense".

Oh and "This Must Be The Place" is the warmest, friendly pop song I know...such a great feel for a "naive" melody. Makes a great morning wake-up tune too, especially the "Stop Making Sense" version!