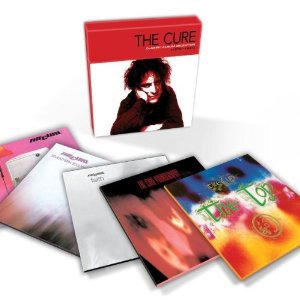 The ridiculously good and very affordable Classic Album Selection -- which we have singled out already for its Motorhead and Thin Lizzy sets -- hits another peak with this, the first five Cure albums (remastered) in replica gatefold sleeves with booklets of lyrics and all pulled together in a solid and attractive box.

From their origins as a post-punk band with a knife-thin sound on Three Imaginary Boys (1979), through their increasingly gloomy sonic landscapes on Seventeen Seconds ('80) and Faith ('81) then the pure Gothic darkness of Pornography ('82) and the shift into the eerie psychedelic sound of the all-but-solo Robert Smith album The Top ('84, recorded after the departure of bassist/keyboard player Simon Gallup), this was the Cure and Smith finding their various sounds, inventing Gothic gloom with a pop twist for the masses, and writing some exceptional songs.

They were an experimental band (so not everything works) but had real pop smarts and in Smith one of the more interesting frontmen of the era whose black humour was often underestimated.

After this intro package (just $20 at JB Hi-Fi stores here) make the leap straight to Disintegration from '89 for another, more claustrophobic, trip again.

This is a real Bargain Buy, and quite a journey.