If there is any part of Lou Reed's long solo career which has been overlooked, it is collected in this bargain buy collection. The five albums here -- The Blue Mask, Legendary Hearts, Live in Italy, New Sensations and Mistrial -- took him from the dawn of the Eighties until almost to the end of the decade, 10 years in which he seemed to many people to be adrift.

He was certainly misunderstood and sometimes even reviled . . . and yet frequently delivered songs which were astute, personal, often difficult and always interesting.

That said, even today you will find Reed fans who won't have a bar of this period (and no, these aren't really "classic" albums despite the collection's title). But there's a reason for that, and not much of it has to do with the music.

The decade started when he got married on Valentine's Day in 1980 (to a woman this time, and on Valentine's Day?), moved to rural New Jersey, then did ads for Honda (not Harley?) and American Express, disavowed drugs and alcohol (spoke out against the former and said he didn't want to be around heroin-soaked losers) and took up tai-chi.

This wasn't the Lou Reed that fans wanted.

They wanted junkie-angry Lou and, as Peter Doggett observed in his Reed biography Growing Up in Public, Reed's solo career in the early Eighties came down to one song, Walk on the Wild Side.

"That -- plus Heroin and Sweet Jane [from his Velvet Underground days] -- was the reason why Lou Reed could sell out concerts in Europe and America. Few were coming to hear All Through the Night and So Alone."

His early solo career (collected and considered here) had been commercially unsuccessful and spun out far too few "classic" Reed songs. He needed to to do something and cleaning up seemed logical. He turned 40 in '82.

But Reed, while getting healthy and wanting to survive, also hooked up with guitarist Robert Quine (formerly of Richard Hell and the Voidoids) who, as a kindred spirit, became the foil to Reed's own visceral guitar playing. For years Reed had barely played guitar on record or stage, but with Quine and bassist Fernando Saunders (who had serious jazz chops which Reed admired), he launched himself into a new direction.

One part of it was backwards, to RCA after Arista had failed to get much traction for excellent albums like albums Street Hassle and The Bells.

Perhaps feeling emotionally and commercially settled, Reed began to write songs that were personal -- and that could mean beautiful alongside the dark and menacing as he explored his psyche.

The first song on The Blue Mask almost sets the tone for the decade: it is My House and Reed paints a picture of his domestic life, how poet Delmore Schwartz is one one room (Schwartz had been dead for yonks) and it mentions his wife Sylvie . . .

This was "welcome to my world" as a statement of physical and emotional location, but this is a new world. He says he's got "my writing, my motorcycle and my wife" as Canada geese fly overhead and there is mist on the lake. This house was a very, very, very fine house . . . with a coiling guitar solo.

When he sings "I love women" on the next song - a ballad -- you can almost hear the deafening sound of former fans of Junkie Lou leaving in their thousands. So very few were there for the third song about sober Lou "sick of being underneath the bottle".

But there is also astonishing menace here -- The Gun, the visceral Waves of Fear -- which can seem all the more dangerous for being so contained. "Don't mess with me, I'm carrying a gun. Get over there . . . slowly . . . tell her to lie down, I want you to see this . . ."

That -- and sentimentality as on The Day John Kennedy Died -- comes up again on the next album Legendary Hearts also (Martial Law for example), and throughout these years.

The Live in Italy album -- all the usual-suspects songs plus a couple of the newer ones -- is taut but you can feel motions being gone through, aside from in the music when the band of Reed, Quine, Saunders and drummer Fred Maher, were a real unit to be reckoned with.

There were fewer studio returns on New Sensations and Mistrial although Lou sounded chipper . . . yet he was mean-spirited about domesticity, which suggested a new breeze might have been blowing.

So here is a lot of Lou Reed and some of it towards the end of the collection is, admittedly, a bit indifferent. But there's also a fair swag which might make you want to reconsider this overlooked period.

And at just $20 for five CDs from JB Hi-Fi stores here, that's a real Bargain Buy.

After this it was on to the excellent New York album. But that's another story, told here.

There is LOT about Lou Reed/Velvets at Elsewhere starting here (follow the intralinks, see you in a few years). Incidentally there is a crucial gap between this collection and this budget priced one. 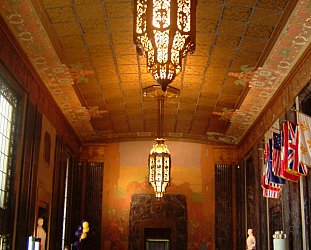