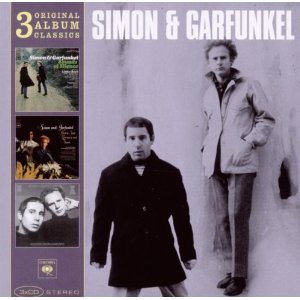 With 71-year old Paul Simon about to arrive for concerts it's instructive to turn back to a time when he would write "I was 21 swhen I wrote this song, I'm 22 now  but I won't be for long,. time hurries on . . ." (as he did on Leaves That Are Green on the Sounds of Silence album).

As a writer Simon often seemed wize beyond his years, world weary before his time (Homeward Bound) and looking beyond his generation (Old Friends).

This three CD collection picks up the albums between Simon and Garfunkel's debut Wednesday Morning 3AM and their massive Bridge Over Troubled Waters ( it omits The Graduate soundtrack which would have been repetitive) and charts their move from folk duo to mainstream folk-pop, notably when producer Bob Johnson added a rhythm section to their earlier acoustic version of Sounds of Silence, the song which opens the album of that title.

This album (as with the others in this colection) is the 2001 reissue so omits Homeward Bound which was on the first UK edition (don't worry, it's on Parsley, Sage, Rosemary and Thyme) and has four bonus tracks which are Blues Run the Game and three demos of traditional folk songs recorded in 1970 but which make sense in this context.

The two bonus tracks are demos of Patterns and Poem on the Underground Wall.

By the time of Bookends in '68 the world had adopted concept albums and S&G followed in their own subtle way: Side one is a strange, ambitious and very non-folk collection which obliquely looks at snapshots of lives at various stages between youth and old age. It was unusual in their canon (loud), distorted in places) but Simon was also looking at his world (America) and the failures of his generation (Over with its line "the game is over").

The second side is more of a mish-mash with the lightlydelic Fakin' It, Mrs Robinson, the  driving folk-pop of Hazy Shade of Winter and the gentle singalong At the Zoo. The bonus tracks are You Don't Know Where Your Interest Lies and a demo of Old Friends.

The album is striking for its innovative production and the attention S&G lavished on it. Soon enough they would be spend hours and hours getting the right balance between ambition and understatement for Bridge Over Troubled Waters.

These are fascinating albums because of the songcraft on display, and it might surprise many just how familiar and recognisable so many of these songs reain. That's a tribute to Simon's writing skills.

And at just $13 at JB Hi-Fi stores here, this classy wee collection in replica covers of the original records is this week's Bargain Buy.

Get a magnifying glass to read the lyrics and liner notes.

For more on Paul Simon at Elsewhere go here. 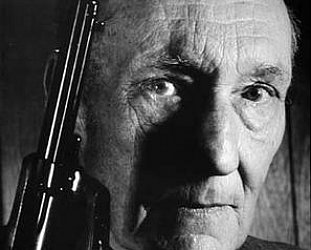