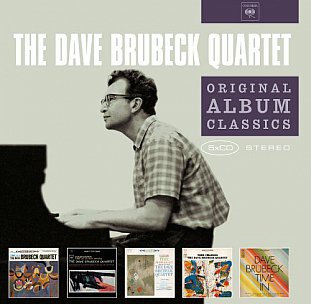 Over the decades, jazz critics and followers have waxed and waned over the late Dave Brubeck's place in cosmos: there is one school which will never forgive the fact he, a buttoned-down and classically-influenced white guy, was the first jazz musician to appear on the cover of Time (not acknowledging that Brubeck was as embarrassed by it as anyone when so many great black artists should have been there first). Then there are others who are prepared to put aside some of his formalism to simply acknowledge his own particular genius.

I'm in the latter camp because for me it was hearing his Take Five as kid that first made me aware of jazz, and why my Dad would play and sing Louis Armstrong songs.

Brubeck's Take Five -- which in all truth belonged to its writer, saxophonist Paul Desmond, and drummer Joe Morello more than the pianist -- was my entry point into jazz . . . and in recent years I've used it to introduce non-music students at university to how jazz works as an improvised art form.

And in five minutes (and six seconds) they get it: the head, the solo, the rhythmic shifts, the improvisational aspect, return to the tune . . . Easy as, never fails.

As one who poured over the Time Out album of '59 which had that track on it. I still have my damaged vinyl copy which, when I had it gifted me at 11, had been played to death by older and much more hip people than I would ever be. I treasure just looking at it.

Time Out is, wherever on the jazz spectrum you come from, a classic jazz album full of memorable tunes, tight playing, clever but seemingly effortless time changes and some beautiful tunes alongside the swingers.

Brubeck continued to explore much the same territory in a number of subsequent albums, although the exoticism of tunes like Blue Rondo a la Turk were rare. Countdown ('62) was dedicated to astronaut John Glenn and the album opened with the title track and closed with Back to Earth. Brubeck was looking beyond the beyond, even though what came between was fairly far in, rather than out.

And on his Time Further Out ('61) album there was a piece entiled Maori Blues because he recalled the 6/4 time song of welcome by Maori in New Zealand when he played here in '59. On the back cover there is a photo of him having a piupiu wrapped around him by a Maori woman at Wellington airtport.

Another reason to give him a bit of leeway?

These five discs are a near perfect introduction to the acoustic Dave Brubeck and his classic quartet -- although you do need a magnifying glass to read the extensive liner notes on the back of these reproduction sleeves.

And any way you cut it, five Dave Brubeck Quartet albums for just $20 at JB HiFi stores here is an undeniable Bargain Buy. And, given the complexity of some jazz today, they come off as almost easy listening, unless you really listen.

I must go and pull out that seriously over-played copy of Time Out that I have, just for nostalgia's sake.

There are some personal reminiscences about Dave Brubeck at Elsewhere starting here.