THE BARGAIN BUY: U2; ZOO TV, Live From Sydney (DVD) 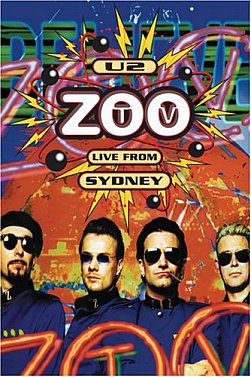 Stadium shows like the recent Rolling Stones event at Auckland's Mt Smart Stadium have become familiar enough for their massive side screens, great sound and integrated lighting effects (not to mention fireworks).

They are entertainment spectacles but in many ways -- because the music and the lights have to be so synchronised -- that they don't really offer a frisson of excitement at the unexpected.

But U2 -- who had the money to lose at the time and a lot to prove -- briefly changed the way a stadium show in the late 20th century could be by using the mass media as a tool against itself.

You could analyse the post-modern aspects endlessly (as I perhaps did here!) but there was no denying -- even if you didn't much care for this band, as I didn't until that moment -- that here was a stadium-sized show that did more than just entertain . . . it questioned the nature of entertainment spectacles themselves.

And by extension it questioned what they were doing.

Propaganda, rock videos, live links, subliminal messages, empty aphorisms  . . . They were all there in the mix, and the soundtrack was bruising, rock-electronica.

For my money U2 would never be as good, as courageous or as self-critical again.

This is one of the essential rock-era DVDs and at just $27 from JB HiFi stores here, this is a cheap introduction into a show that pointed a way forward, albeit briefly.

Their money ran out unfortunately, and then so did their musical ideas.

A truly amazing show on the back of their best album, Achtung Baby (as well as Zooropa which was recorded in between tour dates). The show complemented both albums brilliantly with the noise, light and vision. I was at the previous night's show (also in Sydney) which was infamous for being the only U2 concert without bassist Adam Clayton. He was so hungover he couldn't play and his place was taken by his bass tech (every tech's dream come true?). He did a great job and even borrowed his boss's overalls to help with his disguise.