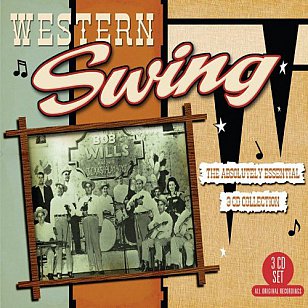 Although the title of this collection might seem to oversell itself, and these 60 songs come with no liner notes, you set all that aside because of the consistent quality of the content and the cheap entry price.

The sound of Western Swing can be as lively as a barn dance, as sophisticated as jump jive and small ensemble jazz, and as downhome as corn bread on the back porch.

A melange of country music, swinging jazz, a touch of folk and even the Southern influences on early rock'n'roll (the standard Ida Red was turned into Maybellene by Chuck Berry), Western Swing is both an enjoyable and interesting discovery if the sound is new to you.

The big names -- notably Bob Wills and His Texas Playboys, Spade Cooley, Milton Brown, Tex Williams and the Light Crust Doughboys -- are well represented here on a collection that throws the spotlight on the Forties and Fifties (so there are no more recent practitioners such as Asleep at the Wheel and Commander Cody).

Texas -- where it seems the style originated, although other states and places might make a valid claim -- is equally well to the fore in songs like New San Antonio Rose (Wills), I Got Texas in My Soul (Williams), Texas Sand (Tune Wranglers) and so on.

There is goodtime music here (Pussy Pussy Pussy by the Light Crust Doughboys, I Want My Rib by Hank Penny etc) but also songs adapted from other forms (the boogie-woogie version of Red's Tight Like That, an ancient-sounding St Louis Blues on fiddle and Corrina Corrine which have their origins in the blues and folk respectively) and songs which have become familiar in cover versions (Smoke Smoke Smoke That Cigarette, Who's Sorry Now, Faded Love).

This fun-time summertime collection -- plus an Asleep at the Wheel compilation -- might be all you need. But this is certainly the place to start.

Not the least because it is just $20 from JB HiFi stores (here).

So it's not only an enjoyable journey but a Bargain Buy.