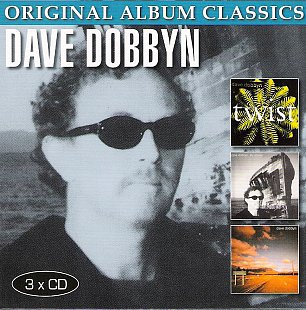 A curious thing happened recently when -- in separate incidents -- I spoke with some young people and then others my own age and the subject of Dave Dobbyn's long career came up.

Both groups were well aware of his time with Th'Dudes and of course Loyal and Welcome Home etc, but his lengthy middle years (as it were) of the Nineties seemed unknown territory.

I mentioned his Twist album from '94 -- which has long been an Essential Elsewhere album (here) -- and was met with blank stares until I ticked off the single Language.

As for The Islander ('98) and Hopetown (2000), even the titles seemed utterly unfamiliar, although the former sprung his award-winning single Beside You and the latter kicked off with the popular Just Add Water.

So here, as almost a public service, we point to this cheap three CD collection which pulls all those albums together, the first of which was his most musically experimental (I think I called it his Revolver at some point), The Islander which showed what a well-honed songwriter he had become (and in places obliquely charted his conversation to Christianity, not overt other than perhaps on Hallelujah Song) and Hopetown for its more buoyant and optimistic tone.

This set will plug that gap in many people's knowledge (with some great songs too) and at the ludicrously affordable $13 at JB HiFi stores here it is certainly a bargain.

And I'm almost distressed to have to do this again, because in June 2013 I singled out this collection. But the price has even dropped in the time between.

Fewer than 35 cents a song now by my reckoning.