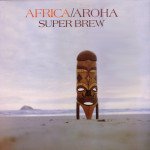 When, just five years ago, this innovative and enjoyable album from '87 was given an "at last!" reissue on CD, Elsewhere used it as an example of how exciting New Zealand jazz had been in those times.

The jazz scene in Auckland has become more vibrant in the years since, but this album still holds attention for its lively criss-cross of African sounds (treatments of Abdullah Ibrahim's Namibia, Coltrane's Afro Blue) alongside originals from the same zone (drummer Barry Young's Agbekor), and saxophonist Jim Langabeer's Aroha.

The band also offer a fine version of Mike Nock's In, Out and Around.

As you may read in that earlier article, there were also some fine players in this ensemble.

With the coverage given to African-influenced music which is popular right now, this album's time might have come again. And even it is hasn't there's hardly any excuse for not checking it out.

I picked this up at my local JB Hi-Fi store in the sale bin for just $5.

From the opening bars I was smiling all over again, and -- given that price and the joyful effect it has -- then we can certainly call this a Bargain Buy.