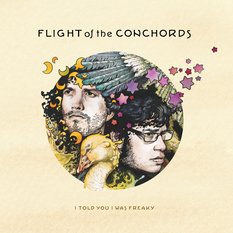 The recent re-screening the complete seasons of Flight of the Conchords on a Sky channel allowed a bit of distance on this decade old series and the chance to see if it still stacked up.

It did, very much so.

It is entirely possible there are people out there who missed this droll comedy show which made hilarious jokes about New Zealand, the music business, New Yorkers and so much more.

All with great songs which parodied genres and commented on all of the above too.

The two series are available on DVDs but the music stands up separately on CD, which is why we bring this to your attention.

It was the Conchords' second album (here is a review of their first) and contains such gems as Hurt Feelings, the mock-rock of Demon Woman, the Peter Sarsted parody Rambling Through the Avenues of Time, the Bowie-like Fashion is Danger, the poke at the Police's cod-reggae of Roxanne on You Don't Have to be a Prostitute, Too Many Dicks on the Dancefloor and more.

Most comedy albums don't have much of a lifespan but because these songs are so self-aware and knowingly smart in their musical references, they can still bring a smile if not a loud hoot of pleasure.

Better is the DVD series with the equally funny images of course, but this album is just $10 at JB Hi-Fi stores here.

And that makes it this week's Bargain Buy.

We wrote about it here at greater length on ts release.