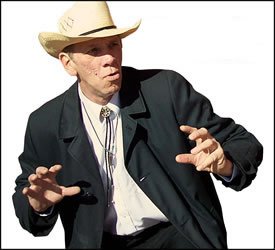 “You tell them this,” says 58-year old bluesman Watermelon Slim in a voice which sounds like he has been gargling whisky-soaked nails. “God has blessed me with an extremely full and interesting life. It’s not all been fun or positive and I’m not proud of everything I’ve done. But I’ve been blessed to get this far.”

Indeed, because Slim -- aka Bill Homans -- has lived like a character in a Tom Waits song. He fought in Vietnam and subsequently became an anti-Vietnam protester, was a sawmill worker, debt collector, firewood salesman, watermelon farmer (hence the name), truck driver, and a petty criminal.

“Yes, I committed felonies every day -- but I didn’t do the stealing myself. I was the wheel man,“ he rumbles, referring to the driver of the getaway car and which is the title of his latest album.

“I had associates involved with the Irish mob. I knew people on both side of the legal fence.”

Slim says this, not by way of bragging, but in a matter-of-fact conversation which also encompasses references to his father who was a lawyer involved in the Civil Rights movement, how he first heard the blues sung by a black woman who worked in their house when he was a child in North Carolina, and how he went to university in the late 90s to reinvent himself.

And while this remarkable character may have been on the fringes of respectable society, he also holds a double degree (history and journalism) and is a member of Mensa International, the organisation for people with extremely high IQs.

“I dropped out of being a journalist when I realised I wasn’t going to cut it in an office. I’m not good at offices. I’m loud, opinionated and slightly difficult. I’m not a fellow who would fit into a clean, technologically-oriented office. Matter of fact, they really didn’t like me at all.

“Whether I like it or not, I look more like a truck driver or a damn wheel man than a journalist or a teacher.

“The reason I can’t teach is -- and I did get educational endorsements in six subjects along with a masters degree -- I don’t have teeth. One school superintendent was candid enough to say, ‘Your lack of teeth is an effective bar to your professional employment’. ”

He embarks on an articulate digression about discrimination in the workplace and legal precedent, and ends up back on the subjects he majored in: American history from the Civil War, American intellectual history, “and I did a sub-major in environmental history. I‘ve also done graduate work in developmental psychology”.

Not that these prepared him for his life as the hardworking and acclaimed bluesman who received six nominations at the Blues Awards 2006 and was described by Ray Charles’ producer Jerry Wexler as combining “Jimmy Rodgers, the Carter family and Bob Wills with Sonny Boy Williamson and Wilson Pickett”.

But it is that other work which provides him with not only the source of his songs -- he despises the whole “I lost my baby” blue style noting he has lost more than a few himself -- but also the dirt under the nails to be authentic.

Slim -- an Anglican looking forward to singing hymns and taking communion when in Auckland -- admits he thinks about that a fair bit: he doesn’t keep good health and ticks off a heart attack, stroke, various injuries, on-going problems with the few teeth he has in his lower jaw . . .

“My health history says things are going to go wrong. I’ve had a lot of serious injuries because I never held back from doing stuff, I’ve always been physical.

“I’ve tried to eat right, but I drink a lot. I couldn’t say I have been concerned with my security.

“But I don’t have any other option other than to play music. The only other would be to get myself a new truck and run my own business as smalltime owner-operator.”

And he’s serious: the man who garners awards and enthusiastic reviews for his earthy, honest, high-powered blues with his rocking band the Workers says he does consider maybe getting a new truck. You won’t hear that from blues players half his age for whom this music is a career and not a calling.

“No. What’ve they ever done to break a sweat? Their parents supported them. When I was growing up playing this music people would say, ‘Oh dear, this is not what we want for our son’.

“But I just went on playing in spite of that.” 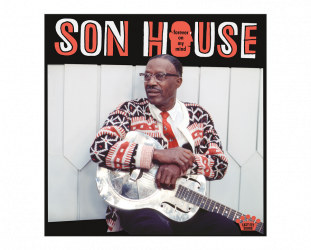