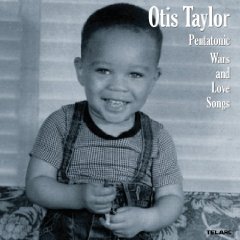 A copy of this album has been in and out of my player for at least two months and I assumed it had already been released some time back and I'd missed my chance to comment. But the amount of repeat-plays it was getting suggested I write something, and now I find it has only just come out.

Happy to bring it to your attention then because bluesman Taylor is unlike any other: his last album was him on banjo, he has a strong political thread running through his work, his blues are neither jagged nor spare but sit in what he calls "trance blues" territory for the most part, and his songs have a considered and often quiet reflection about them.

Here he has a couple of guests -- guitarist Gary Moore drops by (again) and pianist Jason Moran comes to the sessions too. But it is Taylor's aching voice alongside that of his daughter Cassie (often ethereal) and the arrangements for subtle cornet, cello and violin which elevates this music and takes it into a different realm.

These are love songs but, typically with Taylor, they aren't chipper and upbeat: they are songs of the love of a parent for a child, of children for each other, of a woman who leaves her husband for a woman, of a crime of passion, of a ghost calling for his lover to join him in the world beyond the grave . . .

You certainly should be. Taylor writes hypnotic, often metaphorical songs which are atmospheric and engrossing.

This is another excellent album in a long and productive career which has been punctuated by many high points already.

I have never heard of him but based on this i think i should go and check it out. Seems they have great songs.