Wilson Blount – aka Big Daddy Wilson – is certainly a bluesman with a point of difference. He may have been a Southern black kid and born in North Carolina, but he's honest enough to admit he didn't even hear the blues until he was in his Thirties and living in Germany where he'd gone to serve time in the military.

And as he tells us in this candid interview, the first blues he heard came from an even more unexpected source.

Today however he has eight albums behind him, is signed to the Ruf label alongside the late and very great Luther Allison whose manager started the label, his hero Eric Bibb, Walter Trout and others, and deliver a smart line in music which touches gospel, soul, country and folk as much the blues which made such an impression on him when he first heard it.

Because we are so far away from the origins of it. So we would hear it in a very different way than you might.

Yes. As I been traveling and going to different countries I find everyone had a unique experience with the blues, and blues to me is a feeling. It had its origins in the States and even Africa but it's not limited to that, it's worldwide and a feeling which has no colour or border. 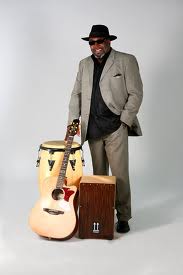 I understand you came to this music later in life than we might expect from a boy from North Carolina, it happened in Germany. When was it that you heard the blues.

I must have been around 32 or 33 when I first heard the blues. It was late and it was surprising coming from the south and being a black American you would think I would be accustomed to it. But I was from a very small town [Edenton, pop. around 6000] and they only listed to the country music played on the local radio station and the gospel music in church. But there was no blues in that area – even though Carolina is known for the blues.

Blues fell off the radar for a long time in black consciousness.

Exactly, the young kids didn't want to embrace it, they felt it was a negative reminder of something and they failed to see the richness of it. Of course there are some negative things about the music and the culture, but there are so many positive things you'd be wrong to just view the negative aspects.

When you first heard it, it had an emotional impact. Do you believe there is a kind of cultural memory that we have so this music stuck a chord that you couldn't explain?

That is exactly what it did for me. Once I heard it I knew that there was something missing in my life and that this hit the spot like no other music. I like soul and gospel and funk, I like country, but no other music hit me like simple blues/ Once I heard it, I knew I had found what I was looking for and what I needed to do. It wasn't just something to hear, but something to do. It was a healer for me, it was that big.

Do you remember who those first blues artists you heard?

If I was honest and truthful, because I discovered the blues in Germany, it was guy by the name Abi Wallenstein from Israel and he was living in Germany. He plays the blues and used to be a street musician but also plays the big festivals. He as the first one I heard play the blues.

This is a strange planet you are on, Wilson. You heard the blues from a Jewish guy from Israel in Germany and you are from North Carolina? 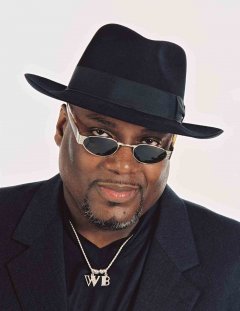 There you go. [laughs] That is strange. The second one I heard – because I was hooked – was when I answered an ad in the paper and got in contact with a guy named Steve Gallis [sp?] and his band. They were looking for a singer and I answered the call.

The first song was Stormy Monday, the first blues song I ever sang. I didn't know it and they gave me the text on a piece of paper. They had another singer there to show me how it goes and then I sung it, and I knew then that was it.

You'd sung gospel prior to that?

Yeah, my family was church-goers and everyone had to be in the choir. It was something that I did but nothing I really wanted to do, but you had to. That was the first music I ever did.

So singing came naturally to you?

Well, I loved music but was really too shy to sing in public and was forced to do the gospel. My first cousin was a bass player and drummer and they were my first love, but it was a big family and the younger ones would cry so long and hard that they would receive the instruments. So there was nothing left for me to do and so they said, 'Then you sing'. That's how it al started.

It's interesting you started in Germany because jazz and blues musicians all say the same thing to me, 'You can't give away our music in America but in Europe they are very receptive'. I've seen that myself, the Europeans respect it. So you had an audience immediately?

Yes, people embrace this music in such a way that you think 'Wait a minute!' It is incredible. They love art and culture and the Americans rejected this music, so I was fortunate to discover the music in Europe where it is embraced.

In American it comes with the weight of cultural history, whereas in Europe they may hear it as an honest expression of an emotion and as an art form.

Yes exactly that. What I like is how people interpreted this music, and you have great blues musicians in Germany. I had a band in Budapest too and those guys there were super musicians, they can feel the music and play it. To experience these people interpreting this music underlines it is just a feeling and it doesn't belong to a certain people. It belongs to everyone, and that's what I try to spread out there.

When you take your music back to the States how do they see you?

Well, I went back recently and in Memphis they responded in a big way. I mostly do acoustic music so I need a listening audience and I was surprised that in some of the pubs and clubs they did listen.

Does a back audience in the States hear you singing in a different way? Do they hear a European influence?

No, they just ask me 'Where have you been, man?' I enjoy living in Europe and going to the different countries but I have a tour planned for North and South Carolina but my main focus is in Europe. 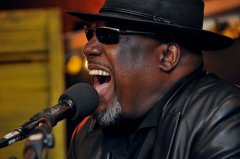 You are not just a straight blues musician because you bring gospel and folk into it. I guess the advantage of being away from the States was you weren't just immersed in the one world, you could draw from all these styles.

Exactly right. I'm free and I like to express that in the music and because I didn't grow up with a big blues background I didn't know the great blues artists, so I could just play what I felt, and I felt all these different styles. I had a soul or funk song and people would say 'Oh that is the blues' so it didn't matter what I sung it was the blues. [laughs]

I try to bring different flavours, especially on the CDs, especially country music because they are great storytellers. And I try to put a little spiritual music in there too and maybe a reggae feeling. I like to keep it mixed up because that's what I'm about.

I remember the first time I heard Eric Bibb I thought he was part of a new generation reinvigorating the blues, he went off to Mali and so on. The music wasn't locked into a period or time and I heard the same in you, that you are adding to the tradition by bringing these other elements in.

I think that's what you have to do. By the way Eric is one of my heroes and when I first heard his music I knew that was a style I liked. And Taj Mahal does that also, they incorporate a lot of things into the blues and that's important if the blues is to stay living and help the young people see this music is not dead or boring. You can interpret it many ways. It's important to do your own thing with the blues, because if you go back to the old guys they just done their thing and it was rural country thing in bad English and that's the way they sung about their daily lives. But we experience this internet age so we should put that into our music , but also reflect on the past.

When I heard Robert Cray for the first time I thought it was new blues because there had been rural blues and urban blues, but he was making 'suburban blues' because that was where people now lived. His songs reflected their concerns in a modern world. I heard that in your music too, that it's relevant to people and yet grounded in tradition.

That's what I try to do, and Robert Cray is another hero, a great performer. 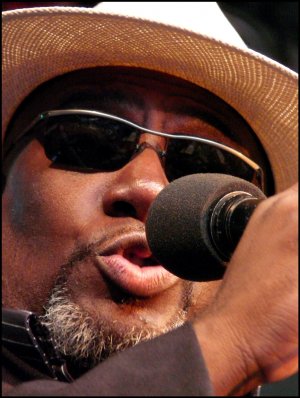 Do you listen back to old blues artists or do you have to leave that and just do your own thing.

Oh no, I have to do the research because I know so little. That is very important to me, to find out what these guys did. When I first started to write my first song I couldn't play the guitar – I still can't, not very well. So I took all the strings off my wife's guitar and just left one string.

I wrote my first song with one string, but that is nothing new because back in the day those guys would play an instrument called a diddley bow. And it just had on string.

I didn't know that. But there I am in Germany on a one-string guitar like back then. I was connected somehow. That is why I am sure this supposed to be for me.

Anyway, if you needed any help you can always ask the Jewish guy from Israel.

Oh yeah. [laughs] But yes, I have to look to the past and get some strong inspiration from there.