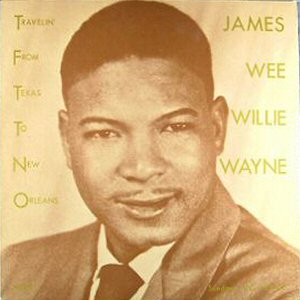 Such mystery as there is about rhythm'n'blues singer James Wayne is compounded by the well-meaning writer of the liner notes to the 1980 Dutch compilation Travelin' From Texas to New Orleans, one of the very few existing collections of Wayne's work.

With English clearly a second language and a somewhat imperfect understanding of geography the unnamed writer informed his readers that, “His real name was James D. Waynes and he was probably born in Texas, possibly in Shreveport, Louisiana”.

To be fair, the artist himself hardly helped matters: He sometimes recorded as James Wayne, James Waynes (his actual name) and Wee Willie Wayne . . . and the location of his birth some time in the early Twenties is either Houston, New Orleans or some other place in Texas.

And of his death in (possibly) Los Angeles, perhaps in 1978?

About as much is known of his leaving as we know of his arrival.

So of the few certainties are these: He had a decent hit rhythm'n'blues hit in '51 with Tend to Your Business which was recorded in Houston (and appears on that Travelin' album in two versions, the version with melodica recorded a decade later) and that he was one of the first to record Junco Partner/Worthless Man which went on to be much covered, not the least by the Clash. After '51 he label hopped as he shifted from place to place. He wrote and recorded Travelin' Mood, perhaps in New Orleans, which also became a standard for NO players. It appeared on Dr John's The Night Trippers' big selling album In the Right Place ('73) and a few of Wayne's other songs pop up on various collections. Albums appear to be mostly out of print but the miracle of iTunes allows for a couple of dozen of his songs.

Wayne's style was very easy New Orleans rhythm'n'blues and he was considered one of the best in the city when he lived and recorded there. He mostly recorded with small, swinging bands, whether it be in Houston, Atlanta or New Orleans. And there's sometimes a real low blues quality to his music (Sweet Little Woman).

But after his brief flirtation with fame and short-lived associations with various labels his story gets fuzzy and he seemed to disappear in the early Sixties.

With a history of alcoholism and unusual behaviour it was inevitable perhaps he'd re-appear.

And he did, rather dramatically.

In early '67 he was arrested in Los Angeles after an altercation with the manager of motel which lead to him setting it on fire. He'd filled a wine bottle with petrol and tossed it on the motel roof, and the manager fired off a couple of shots at him.

His reasoning for what he did was convoluted and not a little confused. He said he was trying to see BB King to play a song to him, that the Mafia were after him because he'd witnessed a murder . . .

Despite the superficial damage to the motel — he was charged with a series of related offenses — he was committed to a California mental institution (initially no one believed he'd been a well-known musician) where he stayed for the next seven years, despite his best efforts to petition his way out.

Repeatedly the psychiatric assessment concluded he was still a danger to others, and quite delusional. He insisted President Nixon had written him a letter thanking him for helping him get re-elected.

But then a public defender took an interest when the story crossed his desk and so he interviewed Wayne at the institution.

He spoke to a few people who knew Wayne and heard their stories about his music and sometimes erratic but hardly dangerous behaviour. That his career had tanked in recent years just added to the decline.

He concluded: “Poor man’s dreams and some booze blur the dreams eventually into a kind of reality. He had cut some demo records, maybe at one time even had a record company interested. The kind of stuff a poor man can build a life of dreams on. Burn away the hard edges of reality with some booze and let the mind go. Loneliness and fear do the rest. Wishing can make it so.” But then he investigated further and most of the story Wayne had told him was true, even the letter from Nixon. He went to record stores and found Wayne's recordings, including that writing credit for Travelin' Mood on the Dr John album and took the case back to court, also arguing Wayne was owed royalties.

There was one last encounter with the public defender (who told his story at length here).

Wayne came to see him and said he'd given his money to a voodoo man to lift a curse that was on him.

He asked to borrow some cash . . . and then he disappeared into the fog of history.

This article was prompted by the record Travelin' From Texas to New Orleans mentioned above being in a box of wonderful old vinyl sent to me by an Elsewhere subscriber. Thank you Joeke, I am working my way through the pile and more such articles or songs From the Vaults will appear because of your generous gifts at Elsewhere in the near future. We've already featured others.