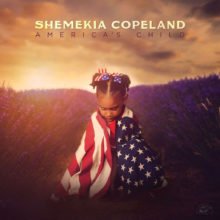 But of more note – especially in an America so divisive and divided – is her two opening salvos Ain't Got Time For Hate (the title speaks for itself) and Americans which is a list of diverse people and cultures in the Great Society “free to be you and me”: Everyone from an Elvis impersonator to gays, a Republican contrarian to a Mexican pin-up, a hermaphrodite to a socialite and so on.

That she (in fact songwriters Gautier and John Hahn – acclaims this diversity and pointedly immigrants – “the first lady they all see holds the torch of Liberty” – are important statements and delivered with passion.

To follow those up with the more bruising Would You Take My Blood? about division rounds out the picture of songs which reflect hope and disappointment in just about equal measure, although the balance tips towards optimism: “We all share a sad history but I'll take a chance on you if you'll take a chance on me”.

Steeped in the blues but here sometimes married to country rock (The Wrong Idea), Americana folk (Smoked Ham and Peaches with Giddens on banjo) or brittle pop-rock, these songs have a strength of commitment even if sometimes Copeland's strong vocals falter a little in places.

Her take on her father's Promised Myself reaches for classic soul balladry of hurt then hope, and Such a Pretty Flame (another of a number cowritten by executive producer Hahn) goes the other way into the need to burn the pain away, almost literally.

It is her choice of songs – Ray Davies' I'm Not Like Everybody Else given a hard gospel-blues makeover – which unify this into a statement of emotional resilience at a time when many people are as wounded as Paul Simon's American Tune once articulated: “I don't know a soul that's not been battered, I don't have a friend who feels at ease, I don't know a dream that's not been shattered or driven to its knees . . .”.

When Simon sang that in the Nixon era it was ineffably sad, Shemekia Copeland doesn't go there but rather stands up for herself and the good people she knows to still be out there.

What was the Obama message?

Singer-guitarist Taylor is nominally posted here under Blues in Elsewhere, but -- as always, see previous reviews here -- he doesn't easily fit into the prescription, broad though it might be.... > Read more